Review: Adrift on the Sea of Rains by Ian Sales 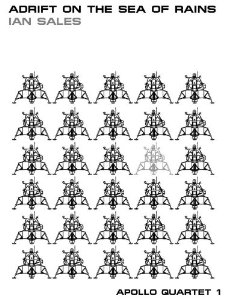 My goal of posting a review for all of the 2012 Sidewise nominated works this year got a huge shot in the arm when author Ian Sales was kind enough to contact me and send me a copy of his novella "Adrift on the Sea of Rains", the first book in the Apollo Quartet. I finished the story, published under Sale's Whippleshield Books (a small press focusing exclusively on hard SF), the day I received it and have finally sat down to write this review after mulling it over during the week.

The story follows nine doomed astronauts from the point of view of their commander, Vance Peterson, after they are left stranded on their Lunar base when the Earth is rendered lifeless by nuclear war. Their only hope is a Nazi wunderwaffe sent to the Moon at the last minute as tensions increased on Earth. This "torsion field generator" (nicknamed "The Bell" and seen before in SecondWorld by Jeremy Robinson) could find them a living Earth by transporting the Moon to a parallel dimension. This small glimmer of hope disappears, however, as they continue to encounter an endless stream of dead Earths.

I don't want to give too much away, since this is a novella and does not leave room for minor spoilers as longer novels do. I can say that Ian successfully managed to us poetic prose usually found in the literary genre to tell this hard science fiction tragedy. The ending is just as bleak as the Lunar landscape, but probably not in the way you are imagining. Despite the horrors that occurred in this story's universe, it is the human condition itself that takes center stage. Questions of free will and logic are thrown out the window when you are faced with utter hopelessness.

There were some moments where the scientific jargon and alphabet soup Ian throws at the reader becomes a little overwhelming, although there is a handy-dandy glossary in the back along with a nifty timeline about the Apollo missions in this timeline where the United States continued their exploration of the Moon even as the military took increasing control while the world's superpowers readied for war. Some reviews I read didn't appreciate these appendixes, but I think most alternate historians will enjoy the back story.

It goes without saying that "Adrift on the Sea of Rains" is a well-researched novella. In fact the amount of research done according to bibliography at the end is staggering. Although Ian does work in some more fantastical elements, it does not hamper the novella, but instead supports the theme (which is very apparent in the sequel) of characters in more advanced timelines feeling they are living through science fiction. More importantly, the story represents two things I wish more alternate historians would do. First, use more real science in their alternate history and, second, write more alternate histories about the space race.

So it goes without saying that "Adrift on the Sea of Rains" surely deserves the nomination for the Sidewise and will no doubt be a strong contender. In the meantime, check out Amazing Stories Tuesday where I will be posting the review of the sequel "The Eye With Which The Universe Beholds Itself" and we might even see an interview with Ian in the near future.