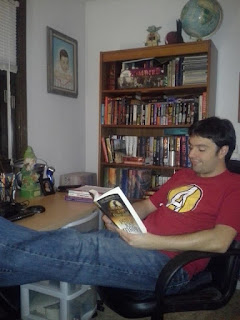 The Update celebrates its two year anniversary today and, as it has become my custom, I went back and read my original post and my one year anniversary letter. I certainly write longer Weekly Updates since the original and I like to believe my writing has improved. The "Important Events in Alternate History" has now evolved into my Today in #althist tweets (which I also do on Facebook now if you haven't notice). There are  plenty of other changes, but the one that really stands out is just the look of the blog. Check out the screen shot I took for our Amazon page: 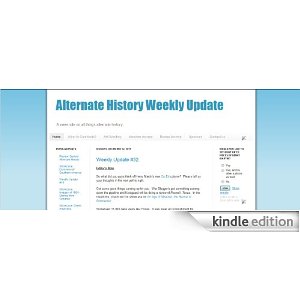 What a difference a couple years and the help of an amazing graphic artist can do for a blog. It was a very simple design since I did not want to drive people away with odd colors or formatting. Meanwhile, I still used the Blogger poll feature (what a piece of garbage that turned out to be) and had zero images. Looking back on how The Update looked, I really like the way the blog looks today.

As a person I feel I have more control over my life since I started blogging. I have a network of writing friends, an awesome gig at Amazing Stories and I am finally a published author (with another story on the way). More importantly, I'm finally starting to feel that what I do on this blog is starting to make a difference. During my interview with Jordan Harbour on his podcast, Twilight Histories, he admitted that I inspired him to take his excellent audio drama toward an alternate history direction. Also I have seen a lot more personal alternate history sites come into existence in the past few months and while they may not have expressly said so, I like to think that maybe The Update encouraged them to carve out their own space in the multiverse.

Nevertheless, I don't want to get too big of a head. This blog isn't going to write or edit itself. There is a long road of work ahead of me if I want to keep this going. That begs the question: what is the future of The Update? Well it really depends on my mood. When I'm in a bad mood I start to resent the blog. I imagine selling it to someone and yes, I do mean for cash. I wouldn't just give it to someone because I want to make sure they give the time and energy I give it, even when I am trying to get rid of it. In my mind, the person likely to pay for it is the person to give it the attention it deserves.

Furthermore, I feel I deserve something for two years of hard work.

When I am in a good mood, however, I begin to imagine what it would be like to create the ultimate alternate history fan site, much like AH.com was before it became just a discussion board. I envision it some like the Rooster Teeth site where you can create your own profile and chat with other fans, create groups and hold events across the world. There would be a place to read articles, watch videos, listen to podcasts, learn about upcoming works and even a publishing arm where you can submit your stories. We would hold an annual convention every year where the best and brightest alternate historians would gather to warp the past. Everyone would be invited, from the counter-factual loving college professor to the most hardcore steampunk fan.

Such a future would take a lot of work and while it would be awesome, I'm not sure if I have the time (or money) to commit to such an endeavor. The blog and my own fiction writing taking up a lot of time as is. Plus I am going to need the help of a lot of talented and hard-working people to get such a project off the ground and it is easy to tell someone about your vision, but harder to get them to sign up for it. Still, a guy can dream.

Anywho, thank you for everything guys. This place wouldn't exist without you. I hope you have all been enjoying the DBWI writing contest and have entered your name for a copy of The Place of Dead Kings by Geoffrey Wilson. It has been fun ride and I have no desire to end it anytime soon. Sorry, but you are stuck with me for the foreseeable future.