Review: The Comedian by Brian Azzarello 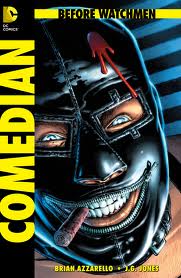 Right off to bat, this will be the title that divides people the most, both for some of the directions – or lack thereof – that the story takes, as well as some of the chooses made regarding the character and the narrative.

The story is somewhat episodic, following some of the Comedian’s behind the scenes missions he performs for the Kennedy family, to whom he is close to several members, as well as some of his black-ops missions he performs in Vietnam, most infamously the Mai Lai Massacre, sparked by the Comedian on a drug-fueled rampage. All the while, he tries to discover who killed JFK – as it wasn't him in this series – and prevent a similar attempt on RFK.

Many of the more faithful readers of Watchmen can tell right off to bat just where this series may start to be divisive, seeing as it was previously canon that the Comedian was the man on the grassy knoll who killed President Kennedy, whereas here, he’s Kennedy’s loyal friend and bodyguard. Combined with some of the other things portrayed in the comic, this will spark no shortage of firestorms from Watchmen fans for years to come.

For good reason ultimately – it might not have been so bad if it had been presented better, but the series has an episodic nature that seemingly jumps all over the place, with some issues barely related to the issue prior. Under a competent writer, with solid direction, some of the, we’ll say artistic liberties, taken with the character might have been more forgivable. As it stands however, all it does is take an already confusing narrative, make it even more confusing, and then add insult to injury by barely connecting at all with the established nature or history of the character the miniseries is supposed to follow.

So here, we have the first real dud of Before Watchmen, largely for the fact it is an incoherent narrative that treats its subject matter’s character and canon as  – pardon my pun – nothing but a bad joke. Skip over this one entirely.

Soldier, scholar, writer and web-voyeur, Sean CW Korsgaard has been active in the alternate history community since 2006, and was recently elected to succeed Mitro as President of the Alternate History Online Facebook group. In addition to his contributions at the Alternate History Weekly Update, he writes for several websites, including his own, which can be found here.
Posted by Mitro at 5:00 PM