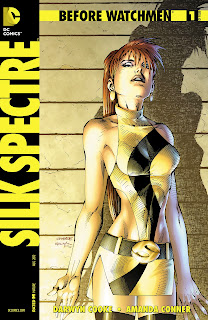 As mentioned before, the Silk Spectre is the most overlooked character in Watchmen, kind of just glanced over, and the Before Watchmen title sought to provide some much needed back-story and motive to her character. I’m pleased to say, the series succeeds in doing so marvelously on several levels.

The story centers on Laurie Jupiter, daughter of the original Silk Spectre, Sally Jupiter, who chafes under her mother’s forcible attempts to train her daughter to take up the mantle in the family trade of a masked vigilante. Needless to say, Laurie, rebellious as all teenagers tend to be, wants to set her own path, and runs off with her boyfriend to San Francisco, where after getting entangled in both the rising counterculture scene and the local drug kingpins that capitalize on it, Laurie may soon discover that she is more her mother’s child than she expected, and that she may take on the mantle as the Silk Spectre for her own sake, and no ones else’s.

Largely thanks to some fantastic writing, the story serves as a sharply written coming of age story for Laurie Jupiter, as she struggles to both live up to and avoid the expectations of her mother, while discovering just what and who she wants to be. It’s a far more personal tale than any other Before Watchmen title, and one which fills out her character in ways that truly help you to gain a greater understanding of both Laurie and the Silk Spectre.

Ironically enough, the title also provides the best look at the Comedian in Before Watchmen, where in a few pages, we see both his twisted monstrous self, and alternatively, a glimmer of a soft-paternal side of Eddie Blake when encountering some of his daughter’s work, and we even see where he gets his now-familiar smiley face button. In literally a handful of pages it did more to develop the Comedian than six issues of his own series had, and is worth checking out the title for this alone.

Of course, it’s worth checking out the Silk Spectre title for more than just that – the series develops on of Watchmen’s most brushed over characters, exploring Laurie’s backstory as she both comes to terms with her domineering mother, struggles to achieve some independence as a person, and takes up the mantle of the Silk Spectre out of her own desire, not her mothers. When combined with a dozen little moments, good writing and the wide-variety of art styles that make up the series – one which arguably is the most faithful to the original style of Watchmen - you have yet another must-read.

Soldier, scholar, writer and web-voyeur, Sean CW Korsgaard has been active in the alternate history community since 2006, and was recently elected to succeed Mitro as President of the Alternate History Online Facebook group. In addition to his contributions at the Alternate History Weekly Update, he writes for several websites, including his own, which can be found here.
Posted by Mitro at 12:00 PM