Is Steampunk the Next Big Thing?

Business News reported that IBM predicted steampunk will be the next major fashion trend in 2013. They based their prediction by having a supercomputer (presumably not a steam powered Babbage Analytical Engine) analyze "more than half a billion public posts on message boards, blogs, social media sites and news sources." I have to assume The Update is one of those posts based on all of the steampunk content I have reported on in the past. Turns out I am one of many because "[f]rom 2009 to 2012, IBM's researchers found, the amount of steampunk chatter increased eleven-fold."

Here are some of the most interesting data points from the IBM analysis: 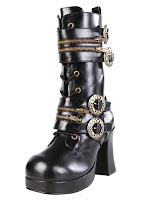 So what can we expect? The fashion of 2013 “kind of looks like engineering work clothes meets Victorian high fashion,” said Dr. Trevor Davis, consumer products expert of global business services for IBM. Davis described "more metallic, more use of woods" in jewelry and "military uniform" like clothing.

Of course not everyone is excited about IBM's analysis. Gabriel Bell at Refinery 29 said "fashion is too big and steampunk too clunky and specific for it to become a dominant style genre. Steampunk is a definitive subculture with a set of aesthetic norms that flourish only within that subculture." She took a shot at IBM by saying it "has all the tools to accurately predict what the fashionable will be wearing in two years, but not the situational awareness to apply them properly."

Steampunk fans are also not 100% on-board with IBM's prediction. Austin Sirkin of Steampunk R&D warned of "a massive influx of people who know nothing at all about Steampunk" who will "rehash a lot of the same discussions and arguments that we've been having for years about what Steampunk is." Then there are "the bad parts of the Victorian era, such as slavery, colonialism, imperialism, sexism, etc." which will come under fire by the media. More importantly, with the greater numbers of kids joining the steampunk movement, expect parents accusing the movement of corrupting their children (i.e. Dungeons and Dragons). 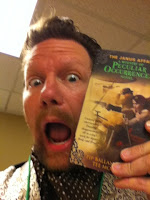 Of course he ended his article by mentioning how much money steampunk artists can make with the expanded audience. Tee Morris, co-author of A Ministry of Peculiar Occurrences series, agreed by pointing out the larger audience he will have for his books and podcast. Tee also tried to reassure by saying "SyFy Crap of the Week we’re thrown, we also get The Avengers, The Hobbit, Serenity and John Carter" (I read his defense of adding John Carter to the list but personally we didn't need another "white guys gets super powers by doing nothing and saves the natives" film, regardless of how influential the original story was on future authors).

More importantly, it is not just the film industry that has a lot to gain from the explosion of the steampunk into the mainstream. The literary movement will benefit from a whole slew of professional and amateur writers who want to take their shot at creating a steampunk universe. Hopefully some will do more then rehash the usual story of the British adventurer and corset-wearing female partner fighting some clockwork menace. Some might even tweak the history of their universe to create a plausible reason for all of the weird tech and fashion that appears on the page. Such alternate histories might encourage some young readers to seek out other worlds where history went off on a different track...