Showcase: A Crack at Draka 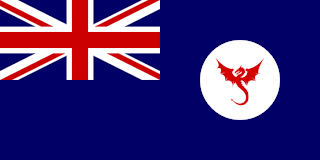 They are the most notorious and controversial culture ever invented by an alternate historian. S. M. Stirling's race of master slavers are horrifyingly ruthless and yet manage to keep some semblance of humanity  at least within the frameworks of their world view. The terms "Draka-lite" and "Draka-esque" have been used to describe various alternate history dystopias created online, but the Draka are not without their detractors.

Many reviewers find S. M. Stirling's universe to be implausible. Admittedly the universe does contain many common AH cliches including airships, space-filling empires and tech wankery. A cottage industry has sprung up to disprove the Draka by either writing essays pointing out Stirling's flaws or creating their own timelines. Most of these timelines lack depth and often just screw the Draka over at some point in their fictional past while keeping most of the history Stirling laid down. Yet every once in a while a timeline comes along which makes a serious attempt to create a realistic Drakan nation to terrorize the world.

This brings us to A Crack at Draka by Municipal Engines. Unlike the above examples, ME makes massive changes to the history of the Draka in an attempt to make them more plausible. The point of divergence begins when Sir Francis Drake doesn't get infected with dysentery and die at the age of 55 in 1596. Instead he ends up shipwrecked at the Cape of Good Hope. After returning to England, he comes back with colonists and South Africa is settled by the English before the Dutch. The Drake family remains in the colony, becoming incredibly wealthy and influential.

Originally named Drakesland, the colony grows and prospers as it stretches north into Africa. It gets nicknamed the "Old Dominion", for its support of the Royalists in the Civil War, but it doesn't scoff at Cromwell loyalists settling in the colony, especially veterans of the New Model Army who help train the colonial militia into an elite fighting force. Although the colony struggles to find settlers since many English prefer North America over distant South Africa, Drakesland nevertheless grows and expands.

Puritans establish colonies on the frontier and influence the Drakan religion (they are not athiests in this universe), the Dutch try to set up their own neighboring colony until they are absorbed and the Scots bring their clan system to the colony. The Loyalists do end up in Draka, because Quebec revolted as well as the Anglo-colonies to its south, denying Canada to them (I never did understand why the Loyalists in Stirling's universe would rather live in South Africa over nearby Canada). As the decades go by the colony grows changing its name to Drakia and later gaining self-governance as the Dominion of Draka.

ME crafted an excellent and plausible timeline. Unlike the other Draka fan timelines, A Crack at Draka does not focus solely on military and politics. ME takes time to describe the culture, economics, philosophy and technology of the Draka. The timeline has a lot of fiber, unlike the bar outlines of the other fan (or attack?) timelines. A Crack at Draka is also devoid of historical cameos. ME does not ignore the butterfly effect, so you won't see Nixon the used car salesman in this timeline.

In the early history of the Draka he describes how the conflicts with the natives led to massacres committed by both sides and how that influenced the Draka's militarism and hatred for black Africans. The Drakan racisim, however, does not extend to everyone as it does in Stirling's universe. For example, the Drakan merchants and politicians were influential in changing how the British managed India, thus avoiding an Indian Mutiny in this ATL (although there is a small rebellion in British North Africa).

This is accomplished thanks to the powerful, and Drakan founded, "Consortium". Part trade association and part secret society, the Consortium includes the richest and most powerful men in the Empire. They have enough power that usually whatever the Draka want, the Empire gives, but they are not omnipotent. Britain still ends slavery, forcing the Draka to reform the system. Slaves became bondservants who have to work to pay off their debt to their former owners (which is nigh impossible).
The timeline remains unfinished and since I want to see more updates, I decided to use my power for my own selfish goals (insert evil laughter here). At the last update we find the United States in the midst of a civil war with a large slave-holding Confederacy allied with Texan and Nephite nationalists (who want to establish the Holy Republic of Devoret). Unbeknownst to the Americans, a secret treaty has been signed with Quebec (a military dictatorship) and Imperial Mexico to intervene in the war.  It is probably only a matter of time before the Draka get involved as well. Will the United States survive?

Whether you liked or hated Stirling's Draka universe, you will love A Crack at Draka by by Municipal Engines. Go and read the timeline and then leave a reply demanding an update. Like the Draka, we can't be stopped (more evil laughter).