How to Write and Publish a Novel in Eight Easy Steps 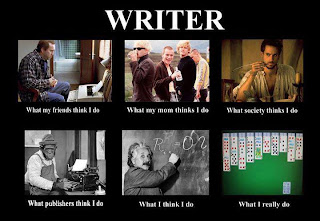 Recently, I was asked how someone could start writing.  It wasn't an easy question to answer, truthfully; everyone has their own method of writing and their own approach to the issue.  This is mine, but don’t feel that you have to follow it completely.  You will probably find your own way of working if you keep doing it seriously.

Still, there are a few things that should be said first.

Writing requires discipline (this goes double, if not triple, if you happen to be trying to earn money writing).  I’m not saying you can't have fun – I have lots of fun – but discipline is important too.

Writing is also a skill, one that needs developing.  Yes, there are people out there who have a knack for writing brilliantly, but most people have to learn the hard way.  There’s a general rule of thumb that says that each writer has to write upwards of a million words before writing something readable, if not publishable.  I look back at my early work and wonder WTF I was thinking – so does pretty much every other writer in the world. Don’t despair – you can push through it.

Writing requires both ego and a thick skin.  You need the confidence to show your work to other people, particularly people who don’t feel an obligation to be nice.  You need the thick skin to deal with their comments.  Trust me – write on just about anything and someone will be very critical.  The temptation to blast them will be very strong, but it is ultimately pointless.  You need a very thick skin.

Step One: The Idea

Each novel requires a core idea that serves as the base.  It doesn't have to be very complex – ideally, you want it as simple as possible – but you have to have it firmly fixed in your mind before you continue.  For example:

“Time-travellers give AK-47s to the CSA.”

“A single warship is all that is left to defend a ragtag fleet fleeing an implacable foe.”

I’m sure you recognise where both ideas come from...<grin>

When you’re writing a novel set in the present day, or the very near future, you don’t need to tell people much about the background, because you can reasonably assume that they already know it.  When your novel is set further away in time, or in a SF/fantasy universe, you need to sort out what the universe can and cannot do before you start writing.  So build your universe first!

For example, just what are the capabilities of advanced future technology – or magic.  How to starships get around?  Can they go faster than light?  What weapons do they use and how do they work?  How many of the weapons do they have?  Can they be replaced?  How does the magic system work?  Can you turn someone into a frog or would that violate too many laws?  Does magic have a price?

Building the universe requires more than just those details.  If you have a future world, how does the government work?  Who gives the orders and why?  How does your state relate to other states?  ARE there other states?

I rarely show my advanced world-building notes to anyone and you don’t have to do it either.  But consistency is important right from the start.

If you’re writing a story set in the past, do your research.  If you make a mistake, chances are that someone will point it out – and that can be embarrassing.  Do your research and think about the implications.  For example, it was vanishingly rare to have women serving as anything other than camp followers (wives and prostitutes) in a pre-1900 military.  Or, for that matter, getting from London to Edinburgh TODAY takes no more than an hour on the plane; in days of yore, it took days, even weeks.  Do the research.

There are writers who plot out each and every little detail and writers who prefer to write by the seat of their pants. (I’ve done both.)  However, the general plot outlines what actually happens in the story, providing for the ending.  For example:

“On the verge of defeat, the CSA is given AK-47s by time travellers, which they use to surge forward, take Washington and force the USA to accept their independence.  The time travellers, however, have their own plans for the CSA, culminating in an attempt to assassinate President Lee when he makes plans to end slavery.  The attempt fails and the CSA manages to capture most of the time travellers, as well as ending slavery.”

Why is this important?  If you don’t have an ending in mind, you may find your plot going all over the place.  That’s bad.  <grin>

The characters are what makes the story actually work, or not.  You can draw up pretty much any kind of character, although it can be harder to make an obviously bad guy a sympathetic character.  The most important detail, again, is consistency; draw up the background information for your characters and stick to it.  This can be as detailed as you like – if the character is the main POV character for your work, I’d suggest being very detailed.  A simple outline might look like this:

If you add details later in the story – for example, Emily and Rupert knew each other from Fredrick High School – make sure you update your character notes.

When dealing with lesser characters, make a note of their names – again, consistency is important.  For example:

You know your characters...now, what are they going to do, specifically?  Think of it as writing out a synopsis of your book.  What character does what, when?  Again, you can be very detailed or just write out a bare outline, depending on the book you intend to write.  However, it is a very important step.  For example...

“When the story opens, General Lee is writing a letter to President Davis outlining the Confederate Army’s supply difficulties...”

This is very important if you’re writing a detective novel and you need to leave clues scattered throughout the text.  What happened?  Who did it?  What did the others do?  What are you going to use as red herrings?

The specific plot can be modified – I’ve had plenty of stories that have developed in ways I didn't expect, once I got into the swing of writing.  However, make sure you keep one eye on the ending at all times.

As I see it, there are basically two types of story; character-driven and event-driven.  Harry Potter is very much a character-driven story; Footfall, Lucifer’s Hammer and Moonfall are event-driven stories.  (A movie example might contrast Battle: LA with Independence Day).  Both can be great fun, but they’re very different types of story.  If writing the former, concentrate on your main character(s); if writing the latter, concentrate more on what’s going on.

Everything you’ve done so far was the easy part.  Now for the hard part.

Set yourself a target – say, 1000 words a day – and stick to it.  Once you’ve mastered that, up the ante a little and move on to 2000 words.  Then 3000...don’t push yourself too hard, but you should try to write the set amount every day.  Remember, you’re training a muscle, just like running; you won’t do so well at first, but the more you do it, the better you’ll get.

Don’t worry about little details like chapter lengths and suchlike.  You get to set your own rules; I’ve seen chapters that were barely 300 words and a 120,000 word book that effectively had only one chapter.  Instead, concentrate on your writing.

Authors have problems editing their own work.  They know what it is supposed to say, so they don’t notice problems when it doesn’t.  If you are serious about writing, you need someone to beta-read for you.  Go to various forums and find someone who might be interested.  There are plenty of people who are prepared to volunteer – just remember, a good editor is like gold.  Treat them well.

A good critic is equally important.  This can be something along the lines of ‘your method for defeating the dark lord makes no sense because...’ or something as simple as ‘you depict the Eurofighter as travelling at Mach 4, but the Eurofighter cannot fly so fast.’

Writers have a tendency, I suspect, to hate the critics.  Our books are our babies and critics invoke parental or maternal feelings in us.  But a good critic can save us from falling flat on our faces in front of the publishers later on.

Bad critics, on the other hand, are worse than useless.  A bad critic will attack the writer, rather than the book.  For example;

“You use the word ‘nigger’ in your books.  Therefore, you are a racist and worthless.”

“Your villains are Islamic terrorists.  Therefore, you are a racist and worthless.”

The bad critic isn't trying to help you.  He wants his fun and he gets it by provoking you.  Ignore him.

Learn to tell the difference between a good critic and a bad critic, and then listen to the good ones.

One word of warning; you can't please everyone.  I was once told that I built a book up too slowly; ten chapters went past before the fun started.  I therefore wrote a book where the fun started at once and people complained that I didn't spend enough time on the characters.  Put bluntly, you can't please everyone.  There isn't an author in the entire world who pleases everyone.

Listen to the good critics, consider their words, and edit your books.

All right, you have a completed manuscript.  Now what?

The blunt truth is that getting published is very difficult.  (Tom Kratman once compared it to Ranger School.)  If you want to put it online as a Kindle document, that’s simple; getting a professional publisher is a great deal harder.  And so is getting a literacy agent.

Find agents (and publishers who take unsolicited MSs) and start submitting.  Read their instructions carefully and FOLLOW THEM.

And then start writing your next novel while waiting.

Another word of warning; there are plenty of scammers out there.  People want to be published and there are bastards who will take advantage of it.  (Think of it as a movie producer who hold auditions on the casting couch, but without the sex.)  It is rare for a genuine literacy agent to ask for any money in advance, so if one does KEEP AWAY.  Don’t give them any money in advance, ever.  Chances are that you will get nothing in return.

Writing can be rewarding.  Believe me, if you write, you’ll learn a great deal about all sorts of things.  But you have to work at it.  Have fun!