Review: Lone Star Rising: The Voyage of the Wasp by Jason Vail 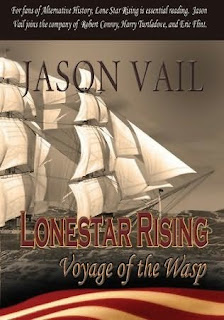 As someone with a passion for both history and alternate history, when I read an AH story I am always curious as to the details of how the altered universe diverged.  I want to know what happened and if possible what is currently going on as the story plays out.  Sadly, not all books that are billed as being alternate history novels, actually take the time to do so.  They in fact come off more like historical fiction; with the exception that it is set is a world different from ours.

I recently read the novel Lone Star Rising:  The Voyage of the Wasp by Jason Vail.  It was released in August of this year as both a paperback and an e-book.  I had not heard of the author prior to reading the book.  In addition to this novel, Vail is also the author of several other books, including the Stephen Attebrook mysteries which are set in 13th century England and revolve around a former soldier turned part-time deputy coroner who investigates murders.

The novel, which is set in 1820, follows the exploits of the frigate TS (Texas Ship) Wasp and its Captain John Paul Jones II.  The story is mainly told in the first person by Jones, with occasional excerpts from future history books.  Jones is the son of John P. Jones, the legendary American Revolutionary naval hero of OTL.  In reality, based on available records, Jones never married nor had children.

The point of divergence for the story’s universe is briefly laid out by Vail in the prologue.  In October 1776, British General William Howe becomes ill and is replaced by General Henry Clinton during the British campaign for New York City.  As a result, General George Washington is killed by British canon fire during the Battle of Harlem Heights and American forces are routed. General Nathaniel Greene and the remaining colonial forces are later wiped out by British Colonel Banestre (Bloody) Tarleton’s forces in North Carolina ending the American Revolution.  Sporadic fighting and guerrilla attacks continue along the American frontier until Tarleton leads a five year campaign to destroy the resistance.  The colonial governments are disbanded and the colonies are directly ruled by England.

Those not willing to submit to English rule, flee over the Appalachian’s and into Indian lands in violation of British policy and begin to settle, establishing the free state of Tennessee. When the region makes diplomatic overtures to France, Tarleton leads a massive British and Native American Army into the region in 1809 and defeats their army, led by Andrew Jackson.  Jackson, along with those willing to follow, migrates to Texas in Spanish Mexico.  By 1820, about 60,000 Americans are living in Texas and Jackson wants to raise an army and declare independence.  To do so though, he needs money.  It is at this point the story kicks in.

We first meet Captain Jones when he is smuggling guns for Rochelle, a shady character in French New Orleans who is also a member of the French intelligence service.  When Rochelle’s ship is damaged as a result of Jones’ encounter with a Spanish naval frigate, Jones must quickly depart the city when Rochelle demands compensation.  A year later, Jones is approached in Baltimore by a group of Texans led by Davy Crockett. Andrew Jackson wants to hire Jones to outfit and captain at Texas’ expense a warship to act as a privateer. The ship will plunder Spanish shipping in the Gulf of Mexico under letters of marque from Argentina, currently fighting Spain, with part of the plunder going to fund a Texas army of independence.  Jones agrees, especially after being informed by letter that Rochelle will forgive his debt if he agrees to take on the job.

He locates the Wasp, a former warship he briefly served on, now rotting in a Virginia shipyard.  The ship is refurbished and sailed to New Orleans where a crew is recruited including Jones’ close friend, an African American named Willie, pirates of Jean Lafitte, several ex-French navy men, and a group of Texas marines lead by Crockett, dubbed the Texas Rangers.  To say anything further from this point would likely ruin the book for readers.  Suffice it say, after surviving intrigues, Captain Jones takes the ship into the Gulf of Mexico in March 1820 and sets off an adventure, which includes storms, pirates, a fiery Spanish Contessa, an attempt to steal a shipment of silver, and a showdown with the Spanish Navy.

I found the book it to be more of an action adventure story rather than a true AH novel.  After the prologue, Vail makes little effort to provide us with additional facts as to what is going in this universe.  The reader is left to divine what is happening based on the bits and pieces which surface throughout the story.  Davy Crockett is the only historical figure who really has a presence in the story with the exception of Jim Bowie and William Travis, who make brief appearances.  This was a bit of a letdown to me. I was also disappointed that Vail did not give us more information about the Republic of Texas and the Free States of America which he references via future history books.

One thing that puzzled me was Captain Jones’ background, which is never expounded upon.  J.P. Jones Sr. was a figure early on in the naval campaigns of the American Revolution.  Given the severity in which it is implied the American Revolution was crushed, I would have expected that Jones’ father would have been arrested and put in prison for his actions.  Given that I was surprised when Captain Jones later states he served as an officer in the British Navy, something I thought would have not been possible because of his father.

These issues aside, the novel was an enjoyable military/adventure story.  Although it dragged from time to time, it contained enough action and intrigue to hold my attention through to the end, especially the sea battles the Wasp engages in.  I also enjoyed the camaraderie between Captain Jones and Davy Crockett.

Although I cannot classify it as a true alternate history novel; I would recommend it to the reader as a decent adventure story with a smattering of AH mixed in.

Fxgentleman lives in the Washington, DC area and has a passion for history, alternate history, reading, and writing.  Since 2009 he has been a contributor to  the AltHistory Wikia, where he has written for 1983:  Doomsday.  He recently joined Another Alternate History Wikia to explore and work on some AH ideas of his own.  When he isn't working at his job for the federal government, he is also working on a long term project writing a non-fiction book about a disaster.
Posted by Mitro at 11:00 AM