Review: The Boys by Garth Ennis 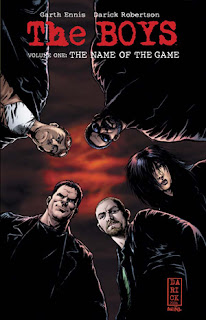 I am no prude.  I do not start screaming for the book burners when I see a naked breast in a comic book.  Those who read books clearly marked as intended for an adult audience have no right to whine when their feelings are offended because they see something that they might consider adult.  I see no point in complaining about comic books that feature hardcore violence – The Ultimates, for example – or even the dreaded S-E-X.  Garth Ennis, however, goes well over the line more than once, to the point where his disgustingness actually interferes with the story.

This pops up quite a bit in Preacher, which featured a character with a face like an arse (gleefully illustrated by his name), and Kev, where poor Kevin Hawkins is persistently interrupted in increasingly degrading conditions by members of various Irish groups that want a little revenge on the former SAS soldier.  (He starts out as being on the toilet, then in the midst of sex, then while masturbating...)  Indeed, it becomes very clear that Ennis hates superheroes, to the point of humiliating them as much as possible.  The all-powerful Authority is brought down by a single man with a gun in their first Ennis story, then humiliated time and time again in their next appearances.  And Ennis wrote the (non-disgusting) Punisher Kills the Marvel Universe, which has the Punisher killing every Marvel hero in the universe.

A trend that runs through almost all of Ennis’s writing is illustrated nicely by Butcher, from The Boys.  “With great power comes the certainty that you’re going to turn into a complete fucking cunt.”  Power corrupts; corruption leads to depravity...indeed, I don’t think I can recall a single Ennis villain who wasn't a depraved monster when the lights were out.

On the face of it, The Boys is a comic book series where a secret black-ops team – The Boys – are charged with policing the world of superheroes, using blackmail, beatings and the occasional bloody slaughter to keep the supers in line.  This is a cool concept, so cool that I kept on with The Boys long after I would otherwise have given up in disgust, purely in the hope that it would return to its original formula.  But it didn't.

One good rule with writing basically runs “show, don’t tell.”  Right from the start, we are told that Butcher, the team’s leader, is the most dangerous and cunning man in the world.  The problem is that Butcher simply doesn’t act the part of a reasonably smart man, let alone a version of Nick Fury.  He’s a devious bastard, all right, but he isn't super-smart.  But then, the plot depends largely on him being an idiot at the right moment.

Perhaps his greatest mistake is recruiting Wee Hughie from Scotland to serve as the latest member of The Boys.  Hughie is a likeable chap – don’t get me wrong, I would like him if we met – but he’s a complete idiot.  He has no talent for violence at all, a complete lack of awareness of the world he’s entered – and is something of a coward.  Butcher does have a fairly good reason for recruiting Hughie – Hughie’s first girlfriend was killed by a super and Hughie wants revenge – but he never tries to train Hughie properly.  Hardly what one would expect from a tactical genius.  Rather more like Duck Dodgers.  And Hughie’s origin story – his life prior to The Boys – is freaking stupid.

Hughie complains in one comic that his role on the team is the comic relief.  That might be true – he suffers a whole series of embarrassing mishaps – but I lost my patience for it long ago.  Recruiting Hughie was a damn stupid move.

The rest of The Boys are equally strange.  Mother’s Milk, easily the most pure-hearted member of the team, has to drink his own mother’s milk (yes, like a baby) to remain strong and healthy.  Quite how he managed to become an Army Ranger with that little handicap is beyond me.  The Frenchman has an origin story that manages to play on every insulting stereotype about France in existence (we are told that it might be simple delusion on his part, as he served in the Foreign Legion and native Frenchmen are not supposed to be able to do that) while the Female, a mute psychopath, has an origin that owes more to horror movies than common sense.

But these guys are basically normal compared to most of the supers.  Apart from Tek-Knight – a cross between Batman and Iron Man – and Annie January, they are a horde of depraved monsters with superpowers, lawyers and a complete lack of scruples.  The Big Bad of the series, a version of Superman, is a monstrous nut with an ego problem, blamed for butchering Butcher’s wife.  (He didn’t – and that reveal is pretty damn boneheaded in a series that is full of boneheaded moments.)  There are a few hints at the beginning of the series that have the superhuman teams go out on missions, before that is dropped pretty quickly.  I think that that was a sign that Ennis was actually updating his background as the series progressed, rather than having it all worked out beforehand.

Behind the supers is the shadowy Vought-American Corporation, which apparently controls most of the world’s superhumans.  VA is freakishly incompetent for a defence contractor (apart from the superhumans, who are not exactly perfect weapons, all of their products fail) and it’s really quite hard to see why they’re still in business.  It is true that some very bad weapons systems have continued in service – the first version of the SA80 and the Snatch Land Rover – for quite some time, but VA is dangerously incompetent.  Their mistakes lead to the destruction of an entire American army in Vietnam.  (And yet history seems to run on a similar path.)

In theory, VA wants to put their supers into defence as living weapons.  Part of the backstory is governed by attempts to prevent them from doing just that.  However, by the time of the story, VA has managed to get their Vice President into office; Vic the VP, a ghastly parody of George W. Bush.  (Take all the bad things they said about Bush, triple them and you might be able to imagine Vic.)  Towards the end of the series, Vic becomes President before being murdered by the Big Bad.

Part of the whole problem with the series is that it takes jabs at comic book cliches rather than trying to tell a story.  In Get Some, the villain is a superhero who has been ordered to represent the gay community, even though he isn’t actually gay.  (One character lamp-shades this, pointing out that being lectured on crystal meth by a guy dressed up as a lunatic is thoroughly absurd.)  A little later on, the Seven’s attempt to stop crashing airliners fails spectacularly.  The supers all team up on a mission...and spend the time relaxing on an island resort and enjoying themselves with an orgy.

Superhero comic book clinches are not the only targets of Ennis’s series.  There are jabs as homophobia (although the whole issue of homosexuality is handled surprisingly well), organised religion (Oh Father, a superhuman linked to the Church, is a paedophile), the CIA’s multiple intelligence failures prior to 9/11, reality TV pageants and many more.

But it is the overall disgusting nature of many of the scenes that make it hard to regard The Boys with anything other than cringing horror.  One superhuman has a mental bug that makes him want to fuck everything, including a cat, an android and an owl.  Wee Hughie, unable to get into the toilet, has to take a shit on the floor of said superhuman’s cave.  Love Sausage’s costume shows his entire penis, covered in latex.  Later, Wee Hughie accidentally performs oral sex on Annie when she’s menstruating...it never seems to stop.  And you really don’t want to know how the Monkey got his name.

The quality of the artwork varies wildly.  Some issues, drawn by Robertson, fit in perfectly.  Others do not, giving the series a cartoonish look that doesn't fit, or characters that are largely unrecognizable.

Overall, I am left shaking my head in disbelief.  Mostly, I curse comic book editors at Marvel and DC for cancelling series that I like.  This time, I think DC was pretty much right.  The Boys is an excellent example of what happens when an editor doesn't exercise more control. Cut out half the disgusting sections, revise half the plot points and you might have a worthwhile story.  As it is, The Boys is a train wreck careering down the hill to disaster.