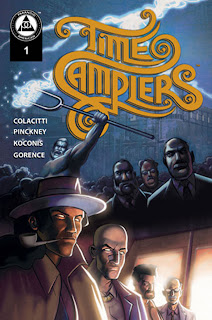 Time travel has always been a perilous plot device for authors. If you are not careful you will create paradoxes, which become plot holes to your readers. Meanwhile, science tells us time travel is impossible forcing authors to often throw up their hands and shout "it's magic, alright?" Time Samplers #1, however, finds an ingenious method of time travel that opens up endless possibilities for future stories.

Written by Thomas Gorence, David Pinckney, and Erik Koconis, the story follows two musicians with colorless eyes as they go back into the past to visit Alexander Graham Bell. Assisted by a scientist and a pawn shop owner, our duo use the "W.I.L.D. Machine" to travel into the past. The machine uses the vibrations of ancient objects and locations to create copies of the past for users to visit from the safety of their own minds. The entire story has a cyberpunk theme going for it, but the idea of being able to go back into the past and watch what happens every time you make a change without having to leave your home is probably a dream many alternate historians share.

Of course the machine is not entirely safe. If you create to much entropy in the system you can put the users in danger. Furthermore, you might not be able to handle what you find when you peer into the past, as our protagonists discovered when they stumbled onto Bell's secret laboratory where he was entertaining powerful robber barons. Conspiracy theories and secret histories abound in Time Samplers, which might turn off plausibility hounds.

Time Samplers major flaw, however, is how much is left unexplained in the comic. You begin by seeing a shadowy figure in a control room using mind control to turn everyone into mindless consumers and jump to a scientist on a lap top describing time travel to our heroes standing in clearing surrounded by armed "sheeple".  I understand why they did this. Time Samplers is not a graphic novel, but the first issue in what I can assume the creators hope will be a long running series. So obviously you do not want to turn people off by burying them in back story. Still a little more would be nice (although you can find some on their website).

Despite the lack of sufficient back story, Time Samplers #1 is a delightfully weird story with a unique take on time travel. Nicolas Colacitti's art is good too, but I have never had much of an eye for art (Comicgeekboy at Geek Syndicate did use the words "stellar" and "glorious" to describe the art so I am going to take his word for it). Hopefully as the story continues the universe of Time Samplers will become clearer and we will see the characters interacting with more bizarre historical figures. Renaissance alchemists? Voodoo Confederates? Nazi Occultists? Anything is possible.