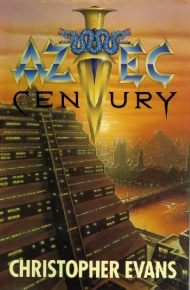 SM Stirling gave us the Draka, who won largely through the author not allowing them to lose.  Christopher Evans has given us a picture of an alternate world where Cortes went over to the Aztecs instead of conquering them and the Aztecs became a world power that, eventually, overran the British Empire.  The POD is a little more complex; unlike OTL, Mexico had a disease that spread to Europe (instead of vice versa) and crippled the Europeans, allowing the Aztecs a chance to become a superpower.  This is even less believable than the Draka, as historically smallpox and suchlike devastated Mexico (and in this timeline would probably cripple the Aztecs too).  Still, I can put that to one side and read the story.

The story is told through the eyes of Princess Catherine of Britain, daughter of the King and sister to Victoria and Richard, who is the heir to the throne.  Catherine is married to a divorcee called Alex and is in hiding, after the Aztecs successfully invaded Britain.  This doesn't last; a chapter or two into the story, the Aztecs manage to capture Catherine and Richard, taking them back to London as prisoners.

Catherine spends most of her time attempting to resist the Aztec occupation with the somewhat dubious assistance of Bevan, a former gardener who becomes her manservant (apparently because the Aztecs scooped him up while capturing the Royals) and ALEX, a computer program based on her husband’s personality.  Her brother, the somewhat dim Richard, is elevated to the Throne as a puppet king, while the Aztecs start making their way towards conquest of Russia and the rest of the world.

(It is probably worth making the point that the geopolitics in this world make no sense.)

She soon finds herself caught up in a subtle political struggle that makes little sense to her.  Prince Extepan of the Aztecs starts to court her, and – after her refusal – marries a woman from the North American tribes.  But this woman is tormented by the Prince’s maid and eventually commits suicide.  Poor Catherine finally accepts the Prince’s proposal, only to discover that her entire life in captivity has been a lie.   She has been betrayed many times over, by just about everyone.

Christopher Evans deserves credit, like Stirling, for creating (or displaying) a genuinely alien society in the form of the Aztecs.  On the face of it, the Aztecs are calm, civilized and Christian.  Below the surface, however, run some very dark currents.  The high nobility of the Aztecs practice human sacrifice and cannibalism, including a point where they trick Catherine into eating human flesh.  They are also incredibly ruthless and, in some ways, more subtle than the Draka.  It seems that they are winning the battle for hearts and minds at the end of the novel.

The writer also displays a masterful grasp of ambiguity.  It is never clear what is going on with some characters, allowing the readers to make up their own minds.  Some other moments come as a surprise, but are terrifyingly obvious in hindsight.  As the central character, Catherine is alarmingly convincing, having moved from being a princess to a fugitive and then to a captive woman in the enemy court.  She makes mistakes that make perfect sense for her.  Clearly, she isn't very genre savvy.

A major problem is that technology has advanced too far in this world.  The Aztecs were historically a largely unscientific society.  They could learn from the West, but not enough to create hovering flying saucers, space-based weapons and other marvels.  (For some reason, they missed nukes – and are shocked when they encounter one.)

If there was a Mexican disease that got back to Europe (and if there was a recognizable Aztec Empire) what might actually happen?  Well, the first problem would be actually getting it to Europe realistically.  It took months to move between Europe and the New World during the original Spanish conquest.  This disease might wipe out every European settlement in the New World and then kill everyone on the ships, before they got home.  It might be quite some time before a ship made it to Europe, which suggests that the disease wasn't completely lethal.  Still, once it got there, the results would be disastrous.  It would burn through Europe, North Africa and the Middle East at terrifying speed.  Their 2012 would look nothing like ours.

Overall, however, Aztec Century is a very good read, if somewhat unrealistic.