I now present my interview with friend of the blog and new author Tyler "Tbguy1992" Bugg: 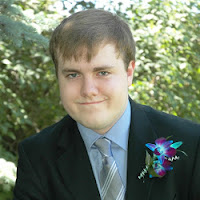 Well, not to much to say. Grew up on a cattle farm about 30 minutes north of the North Dakota border in Manitoba, Canada, and am currently attending the University of Winnipeg in my third year for a History degree. Was always interested in history as a kid, and perhaps that started when I was in Grade 3 and found a book on the Titanic: scared me senseless, my overactive imagination deciding to pretend I was on the boat that night after I read it, but it has stuck with me since then. Ask me anything about the Titanic, and I'm sure I can give you the answer.

I'm also a big PC gamer, playing such classics as Civilization and Command and Conquer (both of which can be considered AH to some degree), and I've recently been getting into the Fallout series, mostly because of the wonderful story rooted in a 50s-esque nuclear wasteland. Would love to get the chance to write for a video game... especially an Alternate History video game. Set in CANADA!

A trip to the local library, oddly enough. Wandering through the small building, I happened to notice a book with the US Capitol building in ruins and burning, with Confederate-flag carrying soldiers around it. I had found Harry Turtledove's Great War: American Front. I read that, and was hooked. A few months after that, I found the Alternate History Wikia online, and the rest is pretty much history.

I had a similar start to my alternate history obsession, except it was Worldwar: In the Balance by Harry Turtledove and it was the cover with Churchill and Hitler standing behind a piece of alien weaponry. Is Turtledove your favorite author?

Yes, I would have to say so. I'm not sure if its just because he was the first AH writer I was introduced to, or if its more because I really enjoy his stories and the entire timelines he creates. The only author I would name as a favorite, as in I have read most of his work, would be Tom Clancy, who does seem to have gone from a secret history in his Jack Ryan novels to an alternate history, not to mention the realistic and plausible World War Three scenario Red Storm Rising. I should find that book again...

How would you describe the Alternate History Wikia to someone who has never been there?

Its like Wikipedia, only with no need to cite your ideas and sources, and the excuse to make up anything you want. And believe me, people have made up whatever they want.  Just some things make more sense than others. I also believe that the AHWikia is a lower step than alternatehistory.com, because when you post on the Wikia, it seems that you usually don't get much feedback except if you ask for it. Its an unwritten rule on the forums that they will poke as many holes as possible into the idea, and any future posts related to that idea as possible. I'm sure, had I started posting my timelines on the AH Forum, I would have easily become dissuaded and gave up on the idea. There ya go! Alternate History on Alternate History!

What is "From Enigma to Paradox" about?

Very simply, its what happens if your most prized "secret weapon" falls into the enemies hands. In this case, its the Germany discovery of the Allies secret "Ultra" operation, the massive project to break the "unbreakable" German Enigma code, and how this will play into the future of the Second World War. The primary result is the "Unmentionable Sea Mammal" (thanks alternatehistory.com!) actually taking place, after a deceitful counter-counter intelligence operation which allowed the Luftwaffe to gain the upper hand in the Battle of Britain. Of course, the story doesn't end there, but I don't want to give away the end... yet.

I guess the main thing was a book I found, written by Anthony Cave Brown, called Bodyguard of Lies. It was written in 1975, as the first wave of wartime documents were declassified in the United States and the UK, which showed exactly how massive, and at times improbable and insane ideas that the Allies put together to fight the intelligence war with Germany, especially the story of how Enigma was cracked. So, taking the story of Enigma, and then the famous "Operation Bodyguard" that deceived Germans to the true location, time and direction of the D-Day landings, I wrote a German variation, where the Nazi intelligence services work to deceive the British through the most vital stages of the Battle of Britain. Plus, I always was a fan of a Tom Clancy-esque spy caper, even if I didn't understand half the techno mumble-jumbo he throws in, so I wanted to try that.

What sources were particularly helpful when researching for your story?

Most of the idea for the story, and the knowledge of Enigma, came through Bodyguard of Lies. For other parts, it was mostly the background knowledge of World War II, including William Shrier's The Rise and Fall of the Third Reich and Inside the Third Reich by Albert Speer, for information of the organization of the Nazi war machine, as well as The World War Two Desk Reference by Douglas Brinkley for tidbits and ideas for future research to flesh out the story.

And, I will shamelessly admit, Wikipedia.

Is this your first published story?

So you have been a fan of alternate history roughly 4 years and are already a published author in the genre, with a review in Publisher's Weekly and you are still in college. Wow. Any comment on that?

I...really don't know what to say, to be honest. I can't believe all of this has happened to the procrastinating, know-it-all, allergic-to-everything farm boy from the middle of nowhere, Canada. I try not to think of it too much, frankly, because then I get nervous that this run of good luck is going to crash and burn.

Then again, it shows anyone what they can do when they put their mind to it.

Oh, I always have Alternate History ideas: just open any history book! However, school is more important at the moment, but my Creative Writing class is helping flesh out and develop stories I otherwise would have put on hold. My timelines, like French Trafalgar, British Waterloo on the Alternate History Wikia is always being added to, but otherwise not much ready to be shipped out.

I do hope to have a larger novel(la) completed by the end of the school year, but time will tell how well that works out.

Do you plan to write fiction in your French Trafalgar, British Waterloo timeline?

I've always been back and forth on this idea. Sometimes, I think it would be cool to try to write a short story, or even a novel or two, based on events and outcomes from something I've already created. However, other times, I don't want to go into any further depth to the story than the God like, third person, "Wikipedia-esque" historical depth I already have invested in it. I may take ideas from it from time to time, but I highly doubt I will ever get around to making a larger story centered on FTBW. Too many other ideas I want to explore than to stick in the same place that already feels fairly well done in my opinion.

I actually just picked up Coup d'Etat, Harry Turtledove's new novel [Editor's Note: Fourth volume in the series began by Hitler's War]. Beside it, I have The Company of the Dead (which I got because A) its Titanic, and B) I read about it here on AHWU) Also have Gibbon's Decline and Fall of the Roman Empire, but I'm taking that one slow. So many other books I have bought, but haven't opened yet!

Normally, this would be the part where the author would say "just keep writing!" However, I'm going a different path this time: something my Creative Writing professor, published Canadian author Margret Sweatman, told us: read! Ideally, you should actually be reading for both research and pleasure almost as much as you write. I take this particular idea to heart, if for no other reason that it gives me an excuse to read books when I'm procrastinating other things. And, don't be afraid to take ideas from other places. After all, every story has been told: its the writers job to retell that story in a new, interesting light, and Alternate History especially fits that role.
Posted by Mitro at 11:00 AM