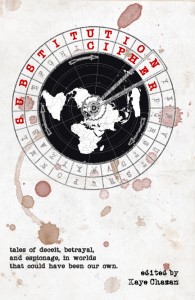 I've said it before and I will say it again: us alternate historians are a wordy bunch. We are so excited to show off the world we built that we neglect the story. That is probably why non-genre authors do so well in the Sidewise Awards. They do not have the same bad habits we do.

That is why I have gained a great appreciation for the art of short fiction. It forces the author to exorcise text blocks full of backstory and get to what really matters. If it is alternate history, we learn what is different not from the author narrating on high, but from the characters as they work through the drama of their lives. So I was very excited to get a copy of Substitution Cipher edited by Kaye Chazan. Some of you might remember that I covered the creation of this alternate history/spy thriller anthology from Candlemark & Gleam early on. Now after a year of waiting I finally got a chance to read it.

Let's start from the beginning. The first story is "So the Taino Call It" by M. Fenn. It tells the tale of a Portuguese spy as he tries to sabotage Columbus expedition to the New World. It reads like the plot of Avatar, but that is not meant to be a criticism since it is a lot more believable than the film (it makes perfect economic sense to travel to another solar system, dig something out of the ground and bring it back). It is formatted as a diary, which you will see more than once in this anthology.

"Sphere of Influence" by Rebecca Rozakis is a cloak and dagger adventure in a moving Venice that steampunk fans will enjoy. To avoid a diplomatic incident, a Venetian agent helps recover a gift that was supposed to be delivered to the ruler of Austria. I enjoyed reading about strong female characters matching wits in a clockwork world and I think you will too.

"From Enigma to Paradox" by Tyler Bugg...have I heard that name before? Of course, he wrote the non-fiction articles The Maple Leaf (Not Quite) Forever: Canada in Alternate History and Rearranging the Deck Chairs and Changing the Course: Titanic Alternate Histories From the Writers Point of View, plus the short story Four Famous Pictures And How They Are Interconnected. So how did this Weekly Update alum's first foray into published fiction hold up?

The story follows a German intelligence agent stumbling upon the knowledge that the Allies have cracked the Enigma machine (the Enigma machine also made an appearance in Fatherland by Robert Harris, the book not the film), but he has come up with a plan to use it against the them. The story starts off like another Nazis win TL, until Tyler takes it in a completely different direction, like any good writer would. All and all, it was an enjoyable read and I look forward to reading more from Tyler.

I wish I could say the same about "In God We Trust" by G. Miki Hayden. The story suffers from its completely implausible alternate history. The United States is predominantly Muslim and gender equality happened in the 18th century. President Eleanor Roosevelt reflects this was likely because the Louisiana Purchase fell through, but it is mentioned that a women served on Washington's cabinet, which would put the POD farther in the past, and America controls Little Rock, Arkansas. What?

Then there is the United Tribes, an ambiguously sized Native American state that has VTOL aircraft (something ATL Americans do not have) and the ability to regrow amputated limbs (something OTL Americans do not have), but are amazed by such American inventions as synthetic fiber and soda pop. Add a space-filling Japanese Empire, a French Mexico and tons of historical characters who haven't changed despite the centuries old POD and you get an alternate history that is contradictory and confusing. I like weird history, but this one will be a difficult read for hardcore plausibility hounds.

Things got back on track with "Something There Is" by C.D. Covington. As the Soviets prepare to build a wall in Berlin, a young girl discovers she has a mysterious connection to her city that the secret police want to exploit. I truly felt for the main character, I know the powerful pull the love of home can be. This story also can be viewed as a different take on the superhero genre. Why do characters as invincible as Superman or with mandates to police dozens of star systems like Green Lantern, operate out of just one city? Do cities consciously choose certain individuals to be their guardians in times of crisis?

The anthology rounds off "The Ashkenazi Candidate" by Kaye Chazan, who is also the editor. An alternate Cold War finds a fascist Britain and socialist (or perhaps communist) United States preparing for mutually assured destruction. To prevent this, the United States has sent one of their best deep cover agents into the heart of MI6. Getting him out, however, could be a problem. This was a good, solid story to end the anthology and I like how Kaye subverted the Bond girl trope (but probably not in the way you would expect).

Except for "In God We Trust", I can recommend all of the stories in Substitution Cipher. You will get your chance to read the anthology on December 18. In the meantime, stay tuned for an interview with newly minted author Tyler Bugg.

Matt Mitrovich is a long-time fan of alternate history, founder and editor of Alternate History Weekly Update and a volunteer editor for Alt Hist magazine. His fiction can be found at Echelon Press, Jake's Monthly and The Masquerade Crew. When not writing he works as an attorney, enjoys life with his beautiful wife Alana and prepares for the inevitable zombie apocalypse. You can follow him on Facebook or Twitter.
Posted by Mitro at 11:00 AM