In a first for Alternate History Weekly Update, I will be announcing a free book give-away this afternoon. I will be making the official announcement with the details on how you can win at 3 pm CST.

In the meantime lets welcome our first readers from Barbados and Cambodia. I hope you guys enjoy today's  weekly recap of last week's alternate history news.

Since Americans make up more than half of my readership, we will continue our coverage of alternate presidential elections in the lead up to election day (Nov 6). We have articles and book reviews featuring alternate election outcomes and I might even skip next week's Weekly Update and New Releases posts to give you even more political AH.

As they say in my hometown: vote early and often!

Ubisoft announced that the reason they created an alternate history setting where George Washington becomes king of the United States to their Assassin's Creed 3 DLC was to avoid fracturing the fan base. Lead designer Steve Masters said:

For me, the DLC has always been a touchy thing for putting important story moments into. Ultimately it fractures the audience and makes it really difficult for people to keep up with what is the canon of the series.

For us, we want to have a little fun with it, and have a less serious experience, a less earnest experience, and setting it in an alternate history environment gives us room and freedom to play around with things in a more whimsical manner.

We think people are going to enjoy it, have fun with it - we've just got to remember it's not part of the canon, it's just there as something for players to enjoy.

This means that the Assassin's Creed franchise will remain a secret history, but fans of the game and alternate history can still get a chance to explore other timelines if Ubisoft releases more AH DLC. Those looking to learn more about King George I of America should check out my article Kings of the United States of America and King Washington the Wicked by Robert Rath over at The Escapist where he goes over some of the historical basis for believing Washington could have been America's fist king.

Check out the new Bioshock: Infinite trailer:
This new trailer shows off more details about the floating, steampunk American city of Columbia and, if T3 is to be believed, the game is likely to be a "Triple A blockbuster". 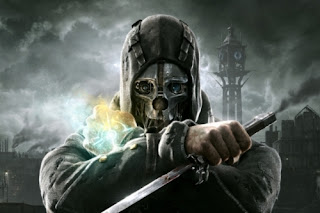 Wow, this Weekly Update has been heavy on video games, and we continue with our coverage of that medium with more reviews on Dishonored. Steve Blomkamp at The Vancouver Observer gave the game an 8 out of 10 and said: "Dishonored is a very strong new entry into the action stealth genre. With it’s intriguing setting, dastardly conspiracies and nail-biting escapades, I implore any of you on the fence to give it a try. You won’t be disappointed." Meanwhile, Doug Elfman at the Las Vegas Review Journal said "Dishonored" is so good, because its priorities are correct."

Have you played it yet?

Alternate History, or what, how and when did it all go wrong? by Jim Smith at conceptualhistorian.

In Praise of the Implausible by Rose Fox at Genreville.

Steampunk Events for November 2012 by Ay-Leen the Peacemaker at Tor.com.

What Do You Do with an MA in Steampunk? by Suzanne Lazear at Steamed!

Review of Every Inch a King by Harry Turtledove done by Mike's Reading Blog.

Review of Ruled Britannia by Harry Turtledove done by Jim Smith at conceptualhistorian.

Review of Wake of the Bloody Angel by Alex Bledsoe done by Ian Shone at Alt Hist.

Kim Newman at My Bookish Way.

CBS’s Elementary Gets a Full Season Order by Geek Syndicate.

Matt Mitrovich is a long-time fan of alternate history, founder and editor of Alternate History Weekly Update and a volunteer editor for Alt Hist magazine. His fiction can be found at Echelon Press, Jake's Monthly and The Masquerade Crew. When not writing he works as an attorney, enjoys life with his beautiful wife Alana and prepares for the inevitable zombie apocalypse. You can follow him on Facebook or Twitter.
Posted by Mitro at 11:00 AM