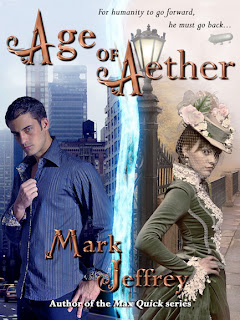 Can I make a confession my dear readers? I’ve never been big on steampunk. I know that saying that in some AH circles is tantamount to treason, but as weird as it is, I’ve never read a steampunk story. That said, when given the chance to fix that, reading the recently released novel Age of Aether by Mark Jeffrey, I couldn't turn down the chance.

In a bleak future where a bioweapon has unleashed a disease that has decimated mankind, mankind’s sole hope for survival depends on a time-travel mission that will send Captain Benjamin Bantam back to 1944, to retrieve the antidote before it was lost to history. Things go awry, however, when Captain Bantam finds himself sent back to 1944, but not our 1944, but an unfamiliar one filled with gaslights, zeppelins and floating hotels, and even space elevators, whose inhabitants sport parasols and monocles, and where the world is in the midst of a friendly cold war between the United States and Imperial Germany. There is however, a familiar evil amidst this world – Adolf Hitler still runs Germany, and he proves no less ambitious, and no less dangerous to this world than he did to ours. Captain Bantam must save this world from the Nazi jackboot ready to press down on their necks, recover the antidote to save our own, with Nazi agents on his heels and the brilliant and beautiful Dr. Rachelle Archenstone at his side.

I will say this much, both the story itself reads brilliantly, and I found myself blazing through the book in one day at college. It is a legitimate page-turner, very reminiscent of an old-pulp spy novel, and like any good pulp page-turner, it succeeds in a large part thank to its action, its cast and its world-building. You have chase scenes across the zeppelin and zip-line filled skies of Manhattan where the stakes are as high as the archologies, and it feels like this could have been an old timey serial, making it a joy to read.

There are some serious flaws with the book I do have to bring up. The first is that the book is deceptively long – though it is just under 300 pages, the typeface is so large that there couldn't be more than seventy words a page on average, and had the typeface been more reasonably sized, I get the feeling that this would have barely been over a hundred-fifty pages long. It’s a real shame, because all of those extra pages could have been put to much better use giving more detail about the world and characters – so little is fleshed out that you feel there is much left untold or unsaid, and between that and the deceptive length, you almost feel cheated. Toss in an ending that felt somewhat rushed and forced, and the result does hurt the book.

Yet, it never sinks it, thanks to Mark Jeffrey’s pulp-novel style and pacing – part of the reason you feel so robbed over the story length is that what’s there is so enrapturing that you want to know more about it. His world-building is fascinating, between massive steampunk space elevators and a Manhattan skyline where zeppelin and zip line are the means of transportation, it pulls you right in. The characterization does so even further, as the protagonist is likeable and relatable – and coming from a military veteran, Captain Bantam’s motivating desire for fame and glory and women is well done – and the remaining cast is entirely fascinating, from the names – tell me the name Veerspike doesn't just conjure up images of a mustache twirling villain – to the characterizations. You really want to see more of all of them.

Overall, despite its flaws, I have to say I really enjoyed Age of Aether. A long time fan of pulp adventure novels, the style had me hooked from the first chase scene, and Jeffrey’s world is a fascinating one, even if by books end you really do want to see more of it. For my first real foray into steampunk, I enjoyed it greatly, and would recommend the book. Author Jeffrey mentions in the appendix that he may return to this universe telling more tales, and I hope he does – and if he can keep the pulp spy-thriller feel and flesh out the pages with more descriptions of the world and cast he has crafted in future forays, this will have the makings of a solid series.