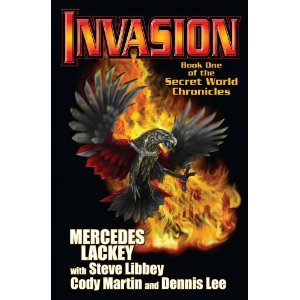 I have never played City of Heroes, the MPOG that is supposed to serve as the basis of this book, but I have read Mercedes Lackey.  To be honest, I have mixed feelings about her books; some of them were quite likeable, while others were considerably less interesting (to me).  I also have some experience with trying to translate something composed by hundreds of people into a single project, something that is never an easy task.  My honest opinion is that Invasion: Book One of the Secret World Chronicles is an excellent example of just how easily such a process can go wrong – and as such it is a very bad book.

The basic setting is interesting, to say the least.  Superhumans appeared in World War Two, or thereabouts, helping to win the war.  The world became used to them until now, when all world governments were simultaneously attacked by soldiers in giant mecha robotic suits with the swastika symbol of the Third Reich on their metal arms. If these were Nazis, where had they been hiding since the end of World War II?  And where had they gotten armour and weapons far in advance of anything on the planet?  This idea is cool, I will happily admit, but it is let down badly by the poor execution.  My greatest complaint against the novel is that it doesn’t even appear to be a complete story in and of itself.

In the first pages, the storyline jumped around from character to character, too many to take in at one time.  Some characters even tell their stories in first person, combining first and third person storytelling to poor effect.  I have a feeling that various different authors composed the different sections, which were then bound together into a volume that is unavoidably clunky.  Worse, I found it hard to care about any of the characters.  Red Banner, for example, is so stereotyped as a communist girl (complete with a touching faith in trade unions) that she cannot really be called one-dimensional.  There are no real glimpses into the bad guys either; they just seem to be men in metal suits.

It does get better if you can read through the first half of the story, but by then my interest was largely gone.  There is no resolution to the story – and no sense of a complete story either.

From my own experience, every project involving so many creators needs a DM – someone who is the final authority on what can and cannot go into the project.  It isn't an easy place to sit, I will agree; the DM has to tell people who have worked for weeks on a specific part of the universe that it has no place in the final product.   However, it needs to be done – and Mercedes Lackey, as a genuinely published author, had the clout to force it through.  But she didn’t.  It would have worked much better if she had allowed them to define the universe and then written in it.

Overall, this idea had much promise, but failed to deliver.

Chris Nuttall blogs at The Chrishanger and has a website by the same name. His books can be found on Amazon Kindle. Check out his new book The Empire's Corps.
Posted by ahwupdate at 11:00 AM