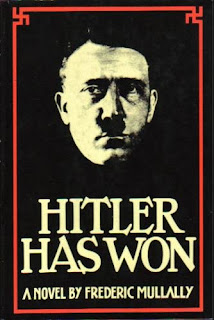 There aren’t many good memories from my schooling to revisit, but one of them concerned a teacher who cared enough to suggest books for me.  Hitler Has Won was part of his collection, one of my first forays into alternate history.  It’s dated and out of print, but it is still well worth a read.

It is 1942/43.  Hitler has effectively won the war in Europe, mainly by convincing the Japanese to strike north rather than south.  Accordingly, Moscow fell, Stalin fled east and the Nazis were able to start their grand plans for reconstructing Europe.  In the meantime, Britain fights a seemingly hopeless war in the Middle East, the USA is isolationist and things look pretty damn bad for democracy.

The story revolves around Kurt Armbrecht, a maimed German Army officer who has been given a rather unusual task.  Flushed by victory, Adolf Hitler has embarked upon a final historic task, the completion of volume two of Mein Kampf, the legacy of his victory to the Thousand Year Reich—Mein Sieg!  Hitler intends to establish his literary reputation in the Third Reich, even as his megalomania rises to new heights.  Armbrecht starts out as an unashamed admirer of the Fuhrer, but close contact with Hitler’s court starts him wondering just what is going to happen to Germany in the future.

Mullally deserves credit for one of the better evocations of a victorious Germany, even though the Third Reich is still comparatively young.  Berlin seems normal, but it isn’t long before we see the horrors lurking behind the facade.  German women have slave girls from the east to work for them, some treated worse than animals.  There is an atmosphere of fear hanging over the city, with certain subjects resulting in immediate arrest and imprisonment without trial.  And there are certain rumours that no one looks at too closely.

Armbrecht finds himself an unwilling observer as Hitler slowly becomes obsessed with a whole new target – the Catholic Church, his ambitions fed by a rogue priest.  In the meantime, his sister becomes the target of an SS officer with wandering hands, who takes Armbrecht to visit one of the concentration camps.  Slowly, Armbrecht finds himself wandering into the midst of a plot to force Hitler to finally reach for the Church and have himself declared Pope, intended to finally push Europe into outright rebellion.

Looking back at the book, it is easy to see that much of the endgame is contrived.  Hitler’s position in this alternate world is much stronger than it ever was in reality – even if his power base is shaken, there are few enemies who can take advantage of it.  Britain doesn’t have the military strength to intervene and America isn't immediately in the war (and will need time to build up if she does enter the war.)  Even so, removing Hitler may just lead to civil war – but will it really bring down the Third Reich?

It is possible to see this book as a commentary on the Vatican’s failures in World War Two, because the Vatican failed badly.  While individuals did what they could to help refugees from Hitler’s mass slaughters, the Pope didn’t speak out against the Holocaust, either out of fear of Hitler’s reprisals or...call me a cynic, but is it possible that some in the Vatican might have regarded the Holocaust as a good thing?

Overall, this is a remarkable book that deserves a wider readership.  One may quibble with the outcome, or parts of the plot, but it is a good representation of Nazi Germany and just what being part of such a nation means for its people.

Chris Nuttall blogs at The Chrishanger and has a website by the same name. His books can be found on Amazon Kindle. Check out his new book The Empire's Corps.
Posted by ahwupdate at 11:00 AM