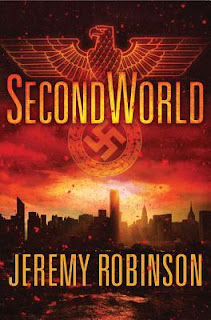 I am always hesitant to review books outside of the genre.  I worry that I will drive away readers who came for alternate history, but were instead presented with something different.  Nevertheless, I still enjoy reading and reviewing novels which could be enjoyed by alternate historians.  Novels like World War Z or Fitzpatrick's War transcend the definition of alternate history and get the term "honorary alternate history" bestowed on them by their fans.  The common denominator for these non-genre books, however, is that they have to be good.  I believe the techno-thriller SecondWorld by Jeremy Robinson could be one of those books.

Our protagonist, Lincoln Miller, is an ex-Navy SEAL, NCIS Special Agent of Jewish and Italian descent.  He is stationed at Aquarius, the world’s only sub-oceanic research facility located off the Florida Keys, to investigate reports of ocean dumping, but in reality it is a vacation for the hard working government agent. He is interrupted when red flakes descend from the surface killing the fish that eat them.  At first Miller believes someone is actually dumping poisons into the water, but when he discovers that he cannot breath on the surface he begins to suspect something much worse has happened.

Someone has attacked Miami, Tel Aviv and Tokyo with a strange weapon that rids the lower atmosphere of oxygen.  Millions are dead and a group called "SecondWorld", with ties to Nazi Germany, has claimed responsibility for the attacks.  Miller is more concerned with getting out of southern Florida alive after a dead blue whale collides with Aquarius.  Collecting what oxygen tanks he can find, he finds a drifting boat and sails it to Miami where he discovers a survivor and some armed SecondWorlders who want him dead.  Though he manages to survive, he wakes up and finds the situation is getting worse.  The United States is in a state of civil war as soldiers go AWOL and entire towns disappear.  Whoever is behind these attacks has completely infiltrated American society and international organizations like Internpol.  Not knowing who to trust, the President of the United States (not named, but modeled after Obama) sends Miller on a mission across the globe to find out who their enemy is and to stop them before they strike again.

Though I try to avoid spoilers in my reviews, from the cover page and my own brief synopsis, you can probably guess that the genesis of the antagonists in SecondWorld reaches back to the last years of World War II, where Nazi Germany is desperately searching for a weapon that will win the war, even if it means postponing their final victory.  In that sense the book has similarities with the Turtledove novel The Man With the Iron Heart and the film Iron Sky.  Though Robinson plays around with history for the sake of the story, he is correct when he references German scientists working for NASA and Nazis hiding in other countries to avoid arrest and execution.  Nevertheless, you can't call this novel an alternate history.  Secret history would be a better term since Robinson does make use of several conspiracy theories (Dulce Base, foo fighters, Nazi UFOs and Die Glocke).  While conspiracy theories make for poor history, in the hands of a good fiction writer they become entertaining stories and in my humble opinion that is the only thing conspiracy theories are good for.

The book was written well, though some characters spoke awfully formal as they were shot at, while the fate of the world hung in the balance.  There were only a few instances of such dialogue, so it was only a minor annoyance, but the technology featured in the novel was a major source of concern for me.  As a techno-thriller, you expect novels like SecondWorld to feature advanced, secret or hypothetical weapons in action.  Yet some of the technology described in the novel sounded so unbelievable that it make the novel a soft SF.  Robinson mentions in the book that the technologies are based on sound scientific principal and while I freely admit I do not have a engineering/scientific background, the implausibility of it made it hard sometimes to maintain the suspension of disbelief.  Perhaps if I get a chance to interview Robinson he can clear up some of the issues with the technology.

Still the book was an entertaining techno-thriller that in some ways made me feel like I was enjoying an intense FPS.  Alternate historians willing to brave other genres should enjoy how Robinson warps our understand of history to dredge up an enemy from the past and unleash him on modern society.  If you do read the novel, ponder Miller's choice in the epilogue and ask whether you would do the same.