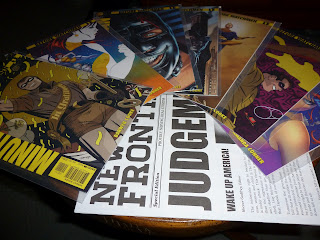 The early titles of the Before Watchmen series have been coming out for almost two months now, and I’m sure I can guess the questions on everyone’s minds: is it as bad as we’d feared? Is it worth a look, or even pretty good? Do we dare hope it even measure up to Watchmen? While it may be too early to tell that last one, I do have some brief summaries of the issues and titles currently out, as well as which ones I feel are worth a look. Read on!

A Watchmen prequel following the adventures of the Minutemen has been talked about for decades, and was even briefly considered being done by Watchmen-creator Alan Moore, so it should come as little surprise that such a title focused on such has been included in the Before Watchmen series.

Following the original group of masked vigilantes that sparked the POD of the Watchmen universe, the first two issues of the title introduce us to each member and the origins of the team by means of a flashback from Hollis Mason (aka, Nite Owl I and author of Under the Hood). It fleshes out the origins and personas of each character, while also dropping hints at the fates that eventually befalls each of them. To top it all off, the title boasts very crisp artwork that immediately hearkens back to the Golden Age of comics, while with its nine panel format, follows the format that served Watchmen so well.

Two issues in, I can easily say it’s the best title in the Before Watchmen line so far, both in terms of story and art, and more than any of the others, feels like a Watchmen title. If you can only pick up one title of the set, this is the one you want to buy, and I am fairly certain that it will only continue to be more so as the rest of the Minutemen issues come out.

Of all the main cast of Watchmen, the Silk Spectre is the one we really know very little about, which leaves plenty of room for her Before Watchmen title to explore. At least so far, I’d say the title has done so marvelously.

The story briefly looks at Laurie Juspeczyk’s childhood, as her mother Sally Jupiter tells her some cold truths about life, before fast forwarding to her teenage years. Here her life is dominated by both her desire to be a normal teen and her mother constantly training and pushing her to follow in her footsteps. She, like so many other children of the sixties, runs off to find herself and gets caught up in a caper in San Francisco that may just prove she is her mother’s child.

The story so far is much more intimate and personal than any of the other titles, providing the basics of a coming of age story while also showing how Laurie begins to accept her succession to the Silk Spectre mantle. It helps that it the line is coupled with some truly stunning artwork, one filled with little nods to Watchmen, such as opening to Laurie dropping the snow globe after hearing her parents arguing. Though it stumbles a bit in the second issue, the first issue hit the nail on the head enough that I expect good things from future issues – I hope I’m right.

You’d never think that a character killed in the first chapter of Watchmen would leave as much of a mark as the Comedian, and yet the psychotic anti-hero casts a shadow on all the events that follow. In the process, The Comedian became one of the most legendary anti-heroes in comics, so needless to say, his Before Watchmen title has some big shoes to fill.

The story opens with a friendly game of football between President Kennedy, Robert Kennedy, Ted Kennedy, and Eddie Blake, aka the Comedian, amidst flashbacks of him killing Marilyn Monroe by command of Jackie. It seems the Comedian is an old war buddy of JFK, and one of his most trusted men when it comes to dirty work. One such bit of dirty work happens to be taking down a drug ring operated by Moloch the Mystic – a bit of dirty work assigned to him the same day JFK gets shot in Dallas. Something stinks, and The Comedian is right in the thick of it.

Of all the titles in Before Watchmen so far, this is going to be the one that sparks the most debates. From the get go, there will be people who will hate it because it’s an unofficial part of Watchmen lore that the Comedian short JFK. Others will hate it because seeing the Comedian playing football with the Kennedys is a far cry from the blood-drunk rapist anti-hero Watchmen immortalized. I can see where they’re coming from… but the story is told so well that I can’t bring myself to criticize it, not yet at least. I do think the Comedian exploring the Watchmen-verse Kennedy assassination has the makings of a great story, and while I’m cautious, there is enough here that I will give it a couple more issues to see where it goes with the story.

Of all of the original Watchmen characters, the Nite Owl serves as the most accessible character, acting as an everyman of sorts for the reader to relate to. While good from a narrative standpoint, for a prospective prequel about Nite Owl II, it poses a problem as it gives the most free reign and the most room to go off track, and as a result, we get the first title of the Before Watchmen series to go off the rails.

The story opens with a young Nite Owl-obsessed Dan Dreiberg, as he uncovers the secret identity of his predecessor Hollis Mason, then trains with him as his replacement, and then an immediate team-up with Rorschach on his first night on the job. Along the way, we see his abusive childhood and his first encounters with his Watchmen teammates, including first sparks with Silk Spectre II.

More so than any other title, Nite Owl was a major letdown. Discounting the artwork, which was great, there really is nothing special about the comic itself to tell you it is a Watchmen title aside from the characters. Of course, even if it weren’t a Before Watchmen title, it would still be below average. The back story given for Nite Owl II never really reels you in, is so generic and impersonal it could be any heroes back story, and at the same time feels very rushed. While we’re only one issue in, this is the kind of handiwork I’m sure a lot of people feared when they announced Before Watchmen. My fingers are crossed that changes with issue two, because if not, this will be the first title of the series to have failed to justify its existence.

Smartest man in the world and the central antagonist of the original Watchmen series, the title that follows Ozymandias had perhaps the most potential as a character study, as aside from Silk Spectre II, Ozy is the character we really know the least about, in terms of both who he is and what motivates him. If Ozymandias #1 is an indication, it may very well cast some light on him while telling a great story in the process.

The opening issue opens to Adrian Veidt, aka, Ozymandias, recording his life story prior to him commencing his plan to prevent nuclear Armageddon that we saw unleashed in Watchmen. He recounts his birth and origins, his struggles with both his intellect and his identity, and how a journey through Asia in the footsteps of his namesake and idol, Alexander the Great, would change both him and his vision to change the world forever.

Thanks in part to the fantastic neo-classical art style, as well as the masterful first-person narrative style which so perfectly nails Veidt’s own voice, the entire story has an epic feel to it, and more than any other title, captures the very essence of the character the title follows. Along with Minutemen, it is the only title that truly captures the same tone and feel of Watchmen, as well as casting a light in some truly fascinating areas for us to look at. With issue one ending just as Adrian decides to become a vigilante, I can’t wait to see where the title will go next.

Curse of the Crimson Corsair – parts 1-7

As a number of you might remember, in the Watchmen universe, because costumed vigilantes are a fact of life, comic books don’t focus on superheroes, instead featuring a variety of stories about soldiers, cowboys, spacemen, and even pirates. One such pirate title, Tales of the Black Freighter, showcased as a comic within a comic in Watchmen, told a story about a man adrift and alone on the open sea, with events happening in the comic usually foreshadowing events going on in Watchmen. To pay homage to this, each of the Before Watchmen comics features two pages of another pirate story, The Curse of the Crimson Corsair.

The story focuses on young idealist sailor Gordon McClachlan, whom after witnessing a crew member keelhauled for a minor offense, and feeling his captain unjust, leads a failed mutiny, and is only saved from the noose by his ship getting sunk by a Spanish frigate. After surviving adrift for days, he is rescued by a passing ship – a ship, known as The Flying Dutchman.

While I’m not a fan of how they limited this story to two pages per issue, I have to admit, it’s good enough I look forward to the next installment as much as I do the next issue itself. The story of Gordon’s misadventures at sea is enrapturing, and the art style of the story is fantastic and fits the tone perfectly. I’ve always enjoyed comics that go beyond the superheroes that most follow, and the salty pirate tale her does quite nicely. While your mileage may vary, and some would be fast to dismiss it as filler, I think it holds its own against any of the other titles. Can’t wait to see how Master McClaclan fares aboard the Dutchman!

So how do the early titles of Before Watchmen hold up to the hype, let alone their inspiration? Pretty well actually, the stories told are enjoyable so far, the art is fantastic all around, and with the possible exception of Nite Owl, so far, Before Watchman is some of the best stuff on the comic rack. Perhaps most importantly, once again, excluding Nite Owl, all of it feels like it deserves the Watchmen pedigree, each title fits the character it focuses on perfectly, and little shoutouts to the original Watchmen abound the better titles.

Is it as good as Watchmen? I think it’s too early to tell, but it’s certainly proved it’s more than a quick cash grab, and has earned my continued attention. Does it deserve yours? So far, I’d heartily recommend Minutemen and Ozymandias, and give a cautious endorsement to both Silk Spectre and Comedian, but if any of those titles sounds like you might enjoy it, I certainly recommend you give it a chance. So far, I’d say Before Watchmen has earned that chance.

Soldier, scholar, writer and web-voyeur, Sean CW Korsgaard has been active in the alternate history community since 2006, and was recently elected to succeed Mitro as President of the Alternate History Online Facebook group. In addition to his contributions at the Alternate History Weekly Update, he writes for several websites, including his own, which can be found here.
Posted by ahwupdate at 11:00 AM