Wow, what a week.  I had some interesting experiences that I just have to share with you, dear reader.

First off, friend of the blog Geoffrey Wilson was kind enough to quote my review of his debut novel Land of Hope and Glory on the Amazon.uk page of his upcoming sequel The Place of Dead Kings. Thanks to Geoff and his publisher for this great exposure of Weekly Update.

Speaking of exposure, I exposed myself (audibly that is) to the world of podcasting when I recorded my guest appearance on the Dissecting Worlds podcast, hosted by Kehaar and Matt Farr. As a long-time fan of podcasts, it was a great experience to be on one talking about one of my favorite subjects.  The episode features us discussing the social sciences involving alternate histories of the American Civil War.  I hope you guys enjoy the episode...or at least not condemn me for the side I take in the war of words involving the Confederacy.

Enough of the past, onto the future.  Along with our usual posts, I will be previewing the next book on my reading list and reviewing The Confederate States of America by Roger L. Ranson.  It is a counterfactual tome that discusses the military strategy the Confederacy needed to adopt to successfully defeat the Union and the economic situation the new nation would find itself in following a successful War of Southern Independence.  Korsgaard might even have a review this week, so stay tuned.

We are so close to breaking 10,000 page views in one month.  This post should put it over the edge, but keep an eye on Facebook and Twitter for the official announcement.

Here are more AH-inspired events you can attend:

8/2/12: The Comedy of Errors, a steampunk retelling of the classic Shakespearen play, opens at the Bowie Playhouse in Annapolis, MD.

3/16-23/13: Want to go on a steampunk cruise?  Royal Caribbean is providing a "Steampunk Cruise" complete with the Duchess of Nola High Seas Ball, which will be held on Navigator of the Seas on March 16, 2013.  More details can be found here. I can personally vouch for Royal Caribbean, since my wife and I took a cruise with them on our honeymoon.  Celebrating New Years on the Caribbean Sea, with a balloon drop and unlimited champagne, was one of the best parties of my life.  I can't think of a reason why the steampunk cruise would not be a great time as well.

If you rather bring an alternate reality to your own home, contact San Franciscan architect Andre Rothblatt whose steampunk bathroom is currently turning heads. 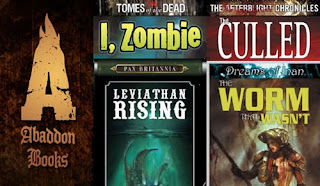 Aspiring authors should take note that Abaddon Books is celebrating its 6th birthday with an open call for e-novella submissions.  They are looking for dark, fast-paced, action-filled novellas from either agents or authors.  Novellas should be between 30,000-40,000 words, but read the fine print before you send your works in.  Just remember they are not accepting submissions until Sept 1st and the deadline for submissions is Sept 30th.

Clowns to the Left of Me, Jokers to the Right by Ben at Portable Homeland.

Do you believe in Magick? by Cindy Spencer Pape at Steamed!

The landmark buildings that never were by BBC News.

So, alternate history? by Alison Morton at Write a Novel? I Must Be Mad!

Book Review: ‘Full Fathom Five’ By Peter A. Smalley done by Matt Bone at The Gate.

FORGOTTEN BOOK: AGATHA H AND THE AIRSHIP CITY by Phil and Kaja Foglio, 2011 by Scott A. Cupp at Missions Unknown.

'The Impeachment of Abraham Lincoln': turning history on its head by Tyrone Beason at The Seattle Times.

Review of 1635: The Papal Stakes by Eric Flint and Charles E. Gannon done by JC Jones at Mixed Book Bag.

Review of Atlantis and Other Places by Harry Turtledove done by Brit at Bitten by Books.

Review of God Save the Queen by Kate Locke done by Jennie at Biblio File.

Review of Land of Hope and Glory by Geoffrey Wilson at Fantasy Book Review.

Because we’d like to get a laugh from a superhero movie this week… by Glenn Hauman at Comic Mix.

Review - Zipang, Episode 3 and 4 by Sebastian Breit at The War Blog.

‘Dishonored’ Is Like A Choose Your Own Adventure Book (Just With A Lot More Arterial Spray) by Nathan Birch at Gamma Squad.