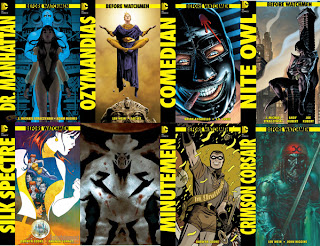 Few names in either comic books or alternate history carry as much reverence as Watchmen. The tale of a world on the brink of nuclear Armageddon, a world where masked vigilantes have existed since the 1930s, Vietnam is a US state and President Richard Nixon was just sworn in for his fifth term has been a magnum opus of both mediums since its publication back in 1986, for the striking artwork of Dave Gibbons, the dark and compelling story by Alan Moore, and for a dozen different details and nuances which have made the series a classic. Few works of any genre or medium can claim to have had the impact or legacy of Watchmen.

So it should come as little surprise given its golden reception (and revenue) that publisher DC comics had been trying to do a prequel/sequel almost literally since the original got off the presses, with ideas ranging from Rorschach’s Journal to the Comedian’s War Diary, to one following the Minutemen, with the one thing holding up such projects being Moore and Gibbons refusal to return to Watchmen. Even that would only keep DC at bay for so long from trying to hatch a few more gold eggs, and after months of rumors and speculation, last February, DC Comics announced they were launching a number of prequel miniseries:

To say the least, the move has attracted a great deal of controversy and attention, with most people either furious that DC would have the gall to add on to what is widely hailed as the greatest comic book of all time, or cautiously optimistic at the possibility of further enhancing it. I myself am one of the latter, with DC’s New 52 having rekindled my childhood interest in comics somewhat, and for your reading pleasure, I shall be handing Weekly Update’s look at the return to one of alternate history’s most acclaimed and beloved works. I will be giving issue-by-issue reviews, looks back at the original Watchmen comics and movie, discussing the impact of the original, and of course, letting you know if Before Watchmen is worth looking into every step of the way.

Who watches the (Before) Watchmen? For now, I do, and I’ll let you know if you should too!

[Editor's Note: Sean has posted a review of the issues he has read.]

Soldier, scholar, writer and web-voyeur, Sean CW Korsgaard has been active in the alternate history community since 2006, and was recently elected to succeed Mitro as President of the Alternate History Online Facebook group. In addition to his contributions at the Alternate History Weekly Update, he writes for several websites, including his own, which can be found here.
Posted by ahwupdate at 11:00 AM