I now present my interview with Jennifer Ciotta, author of I, Putin.  Enjoy: 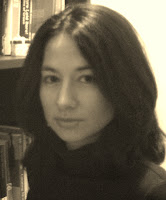 By day, I'm a book manuscript editor with my own company, Pencey X Pages. Before that, I was the Editorial Director of Literary Traveler magazine for five years. I also edited at major publishing house, Pearson.

As the author of I, PUTIN, I spent a combined 12 years of my life researching and writing the book, including the completion of a Master's degree in Russian studies and creative writing from New York University. I was also a Peace Corps volunteer in Estonia.

When I was a little girl, my father would tell me bedtime stories and let me finish them. I truly believe that's what spurred my interest in writing, since I loved to write from an early age.

What is I, Putin about?

I, PUTIN delves into the psyche of Vladimir Putin. The world knows him as cold and ruthless, but is he human, like the rest of us? The story centers around the year 2000 Kursk submarine tragedy, when the submarine exploded and 118 sailors spiraled into the abyss. Putin had no reaction to the crisis for four and a half days, as Russians grew enraged waiting for a response. Putin seemed as if he didn't care about the dying sailors, but I reconstruct those crucial four and a half days in the novel and delve into why Putin waited so long to react. The answer may surprise you.

If you like books and movies where you can't tell what is fact and what is fiction, this book is for you. It's in the same vein of movies such as The King's Speech, The Queen and The Social Network, where you're running to your computer afterward and looking up what's real and what's not.

What inspired you to write your novel?

My inspiration for I, PUTIN stems from when I was living in a small village in Estonia as a Peace Corps volunteer in the year 2000. The Russian submarine, the Kursk, exploded with 118 sailors aboard. Newly elected president Vladimir Putin was at the helm of this crisis and chose unorthodox ways (unorthodox to a Westerner at least) to react. This was Putin’s first tragedy as president, and as I watched the situation unravel, I thought to myself: “Who is Vladimir Putin and what makes him tick?”

What sources did you use when doing research for the novel?

The Economist, Newsweek, TIME, New York Times, etc. and books such as FIRST PERSON (Putin's memoirs), CRY FROM THE DEEP by Ramsey Flynn, INSIDE PUTIN'S RUSSIA by Andrew Jack. Other sources I used were "Dead Soul" Vanity Fair article by Masha Gessen, Larry King interview with Putin, KGB training manual, "The Singing Revolution" documentary. Basically, I used anything I could get my hands on (in English) about Putin, the KGB, the Kursk disaster and exploring Russian history and identity.

I completed a thesis on Putin's KGB Mentality for my Master's degree at the Gallatin School at New York University.

That's a funny story. I didn't come up with the title. I went to a writers conference, thinking I had an epic title, VOLODYA, which is a friendly name (nickname) for Vladimir. I thought it was so great, and the other writers were like: "What the hell does that mean?"

So the writers, the conference leader and I kicked around about 10 new titles. A man, whom I greatly appreciate, came up with the name I, PUTIN. It's modeled after I, CLAUDIUS. And everyone loved it and it stuck.

That's why it's vital for writers to get feedback on both their book and title. A title can make or break sales.

I'm so happy with my cover designer. His name is Kit Foster at www.kitfosterdesign.com. He really understood how to turn my words into the right vision for my book. I receive many compliments on the cover.

What has the reaction been among Russians to your novel?

That I know, only a couple Russians have read it so far. Two have given me feedback. One Russian loved it in its entirely, while another was taken aback by the alternate history aspect of the Soviet history. But the book mixes fact with fiction, and the response I always receive is: "What's fact and what's fiction?"

As someone who has studied Russian history and lived in Eastern Europe, what are some of the major differences between Western and Russian culture?

I feel Russians are similar to Americans. In both cultures, the people are gregarious and friendly, and the country is so big, they have many characters, like we do. What I mean by characters is people with big and/or humorous personalities.

A major cultural difference is Russians have this underlying history of "we all suffer together." Russians have had a long history of extreme suffering between wars, revolutions, the gulag, etc. As a people, they can look at each other and understand what it is to be truly Russian, since they share the same challenges and family history. In contrast, Americans have an underlying history of "we never give up." When times get tough, we band together. However, we don't appreciate true freedom because we've always been blessed with it.

Are there plans for a sequel to I, Putin?

I'm starting to write notes for the sequel to I, PUTIN. Gosha, Putin's fictional personal aide, has received such an overwhelming response so far, the book will center around him.

I did like Gosha, was he inspired by anyone in real life?

He is inspired by another character in the book. I don't want to give it away, but he may be a younger version of someone.

Any predictions for Putin's next term as president of Russia?

Putin's next term as president will be exciting to watch. He has to reinvent himself once again. To appease the opposition in the Russian middle class, he has to appear more liberal and responsive to their suggestions. My prediction is Putin will tweak his image. He will continue to appear young and energetic by staying in shape and perhaps getting more Botox or plastic surgery, and he may loosen his grip on the media a bit. For example, he may welcome some criticism here and there and a few select media poking fun at him. But the real test is if he can restore Russia's economy. Oil is what has made Putin so powerful. If he continues Russia's oil domination, it will be beneficial to him and keep him in power. If not, Putin will have a hard time taming the opposition.

Yes. I'm working on a quick and brutally honest guide on how to self-publish. I want aspiring authors to learn from my mistakes, so I'm going to cover what services to spend on, what to do yourself and why credentials are so important for indie authors. These are just a few of the topics I'll cover. I hope to have the ebook out in summer 2012.

What are common mistakes made by self-publishers that should be avoided?

My number one tip: Do not attempt the interior formatting for an ebook by yourself. I wasted six weeks doing it, and then I finally realized I needed to be a coder. So, I learned my lesson and I've paid a service to format both my paperback and Kindle interiors. The lesson is: You have to know where to spend money when self-publishing (which I cover in my forthcoming ebook).

Do you have any other advice for would be authors?

First, never give up. If you feel you have to get a book out of your system, and that feeling won't go away, you have to write it. Research, hone your craft and build your platform. Make your book the best it can possibly be.

Second, never give up. I had a creative writing professor tell me that I would sell one or two copies of I, PUTIN. In March 2012, the book had over 500 downloads in one day on the Kindle. Never, ever give up.

Those interested in learning more about I, Putin should check out my review of the novel.
Posted by Mitro at 11:00 AM