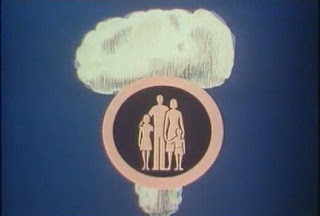 Alternatehistory.com has seen numerous excellent timelines posted on its site. The group of timelines that comprise the Protect and Survive universe deserve to be among the best.

The heart of P&S is Protect and Survive: A Timeline, telling the story of the buildup to a nuclear war in February, 1984 and its aftermath, primarily set in Newcastle, England. This storyline was started by AH.com member Macragge1 in August 2010, using lines from the British government's Protect and Survive campaign as a launching point to tell his story.

From the beginning Macragge sought to tell a forthright, if bleak, account of what would happen during such an event. The timeline was influenced by a number of post-apocalyptic novels.  Stylistically, his storytelling takes inspiration from David Peace's GB84, about the 1984 miners' strike in Britain. Macragge's characters are not identified by name for the most part, instead referred to by such monikers as "the Controller" or "the Librarian". This is no ways dehumanizes Macragge's characters; their humanity is very much in evidence, particularly in how they cope with the sudden harshness of daily life, the very difficult decisions they must make just to survive.

In each update, Macragge starts by quoting from the Protect and Survive pamphlet (and later, from other works, like popular 1980s songs), then gives a general view of the world as of that point in the TL. This is where we learn, for example, about the buildup of tension between the U.S. and USSR; the event that triggers the launching of missiles and bombers (here after referred to as the Exchange); how badly Britain gets hit; and news of the rest of the world as the surviving British government receives it.

This is not a timeline where everyone gets hit badly and things get better afterwards. Things can, and often do, go badly; decisions can have both bad short- and long-term consequences. People choose to go on, although their daily lives become harsh. Food and other necessities trump the rule of law; choices that might trigger outright revolt in peacetime are considered after the Exchange as necessary.

Requests from readers soon led to a spinoff storyline, in which the British government sends a team to the United States. Like P&S, the spinoff takes a bleak turn. Not all of the team members get along; the journey across North America is difficult; and, due to the actions of one of the disgruntled Brits, the storyline takes a shocking twist - one that ends badly for a very important player within the TL.

That spinoff led to others based in America, starting with Gen_Patton's Duck and Cover, which follows Macragge's TL stylistically and focuses on Cleveland, Ohio (which somehow managed to not get nuked); Rome, Georgia and Walla Walla, Washington. Gen_Patton tells the story of the war and its aftermath from the standpoint of survivors trying to rebuild the U.S. homeland.

Duck and Cover was followed by Chipperback's Land of Flatwater: Protect and Survive in Middle America, telling the story of the war and its aftermath from the perspective of characters in the state of Nebraska. Here, Chipperback pulls no punches, but diverges from Macragge in two respects.

First, he gives his main characters names and fleshes out their lives so we know them well, and get ideas on how the war affects people at various levels of society: Chip, a young boy from Omaha; Bob Kerrey, the OTL and ITTL governor in 1984; and Tyler Tyles, a man whom would be labeled a domestic terrorist in our time, among the several well-developed characters.

Second, the characters seemed determined not only to survive, but to live (albeit not quite in the same fashion as before). This could be a reflection of the American versus the British mindset; characters in P&S seemed resigned to their fate, accepting that life has become 'short, brutish and hard'; in Land of Flatwater, characters acknowledge their circumstances and seek to rebuild (or, in the case of Tyler Tyles, attain power).

Macragge is not the only creator to set a timeline in Britain, and Europe was not to be ignored in the P&S universe.

The Last Flight of XM594, written by JN1, focuses on a Royal Air Force Avro Vulcan bomber crew tasked with hitting targets in the Soviet Union and its allied countries during the Exchange.

Will Ritson - whom AH readers may know as the creator of the Images of 1984 - Stories from Oceania timeline - also contributes to the P&S universe. There Won't Be Any Illuminations is set in Lancashire, England.

Mario Rossi's timeline, Noi nom ci saremo, is based in Italy, telling the story of the buildup from the perspective of people in the Italian government. It unfortunately seems to have stalled, as there haven't been any updates since late 2011.

DrakonFin tells Finland's story in The Land of Sad Songs. It carries on the stark bleakness of Macragge's TL - perhaps exacerbated by Finland's being sandwiched between the USSR and NATO members Sweden and Norway. In the P&S-verse, the survivors have to deal with the reality of their country having been hit by both sides; Soviet troops try to stay alive, while Finnish commanders go to extreme measures to procure food.

JoHansen tells the story of Norway in his Nothern Wind TL.

No Rest for the Wicked, written by Agentdark, is set in Africa, stretching from Ghana to Libya to southern Africa.

Back to America, Chipperback's TL inspired stalkere to write Don't Turn Your Back on the Wolfpack

Top Hats Daily chose to set his TL, That Damned Bridge, in Minnesota. American and Canadian troops fight to keep the peace along the Minnesota/Ontario border.

Finally, my own TL, The Last Game, gives the perspective of athletes, administrators and students at the University of Kentucky, among others as the conflict builds towards the Exchange - which comes after the 'last' American major college basketball game to be played, two days before.

Protect and Survive, and its spinoffs, takes the reader through the buildup to an all-out nuclear war, the event itself, and its aftermath as realistically as any story I've ever read. The creators clearly are out to make their storylines as realistic as possible, and also are well-written (both standards which I strive to meet in my own TL).

Readers may be most familiar with the nuclear war concept through the movies The Day After and Threads. Both portrayed the aftermath of their respective events as bleak and hopeless. At least in the case of The Day After, there was a point to this: nuclear war will destroy everyone and everything, with total, utter death and destruction, like the ashen landscape described in Cormac McCarthy's The Road.

Writing such a conclusion may have had its uses in regards to Cold War politics and convincing world leaders that a nuclear war has no true winners. The writers of Protect and Survive have chosen to try to describe the aftermath in a realistic manner - which may not completely agree with Carl Sagan's nuclear winter theory nor with readers who foresee the conclusion of such an event as leading only to total extinction.

In any case, the various timelines have not advanced too far into their futures from the Exchange. In that regard there is much room not only to advance the various storylines, there also is time to build a realistic vision of what a post-nuclear world would look like.

Whatever shape that takes, the creators of Protect and Survive are certain to tell the story in an engaging manner, full of the victories and defeats the characters are certain to encounter, and the blunt reality of their new lives.

Brian W. Daugherty is, among other things, a fan of alternate history who got his start in the genre with 1983: Doomsday. He eventually became an administrator at the Alternate History Wikia, and continues to contribute both there and at alternatehistory.com.
Posted by ahwupdate at 11:00 AM