Review: "The Company of the Dead" by David Kowalski 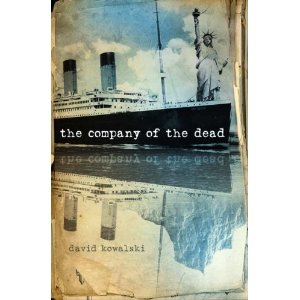 Just because something is improbable does not mean it is impossible.  That is a common phrase you will find in David Kowalski's The Company of the Dead.  Originally published in Australia, this award-winning novel is Kowalski first work to be published in the United States and a lot of hype has come with it, including praise from John Birmingham and S. M. Stirling.  So does the novel deserve the attention it has been getting?

The story begins when a time traveler from OTL goes back in time to prevent the sinking of the Titanic.  The result of his efforts is a world where the United States does not enter World War I leading to a German victory.  An increasingly troubled United States eventually splits between a reborn Confederacy centered around Texas and the Deep South, while the rest of country reorganizes itself into the Northern Union.  The Union is later defeated and occupied by Japan, which along with Germany, is one of the world's two superpowers.  By the present day, the two empires have conducted a long cold war with actually fighting played among their proxies.  Meanwhile, culture and technology has stagnated.  Decolonization, women's suffrage and civil rights all failed. There was never a space race (but this world does have giant airships called stratolites that act as airship carriers in the upper atmosphere) and nuclear weapons are a recent discovery.

The setting is the weakest part of the novel.  Despite its ASB point of divergence, the events blossoming out from the changes wrought by the time traveler are not always logical.  The idea that the Germans could be victorious in WWI simply because the United States stayed out of the war ignores the effect of British tanks on the fighting on the Western Front and Germany's own internal problems.  Japan being able to defeat and occupy half of the OTL USA is also given way to much credit to the Japanese Empire, even this alternate one.  On a related note, the book's jacket and promotional material appear to misquote the setting of the novel.  America is described as being split by the two superpowers, with Japan holding the West Coast and Germany holding the East Coast.  In reality Japan occupies the West Coast and New York, with the entire Northern Union being a client state.  The Confederacy, however, is independent and a nominal ally of Germany.  Not sure why that mistake was not caught before publication.

Despite the implausible history of the novel, The Company of the Dead is still a good book.  The meat of the story follows Confederate spy Joseph Kennedy as his plan to restore history to its rightful order unfolds.  By linking the plot with Roswell, Area 51, the sinking of the Titanic and the assassination of JFK; Kowalski managed to write an intriguing spy-thriller with mysteries abound.  More importantly, Kowalski presented an important message that all alternate historians should take to heart: changing the past does not always mean a better future.  This is especially true if your intention is to avoid an historical tragedy.  For example, what if you went back in time and killed Hitler before his rise to power?  Would that lead to a better world?  As bad as the Holocaust was, without it we probably never would have had world nations embrace human rights.  Or something worse could have happened, such as the Soviets invading Europe or someone competent taking charge of Germany.  Do you remember what the road to hell is paved with?

Kowalski's debut American novel is a good story with an important message for fans of the genre, as long as you are not bothered to much by plausibility issues.  You only have to remember that just because something is improbable, does not mean it is impossible.