Do Not Give Up on Your Online AH

It is not completely unheard of for an author to take something he or she posted online and later publish it.  Sebastian Breit and Matthew Quinn both took ideas that originated at Alternatehistory.com and turned them into their own contribution toward the larger library of alternate history.

That is why I was happy to learn about this novel that was published last September: 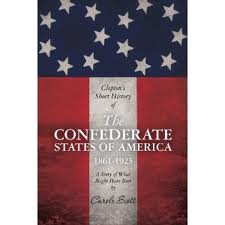 It is titled Clopton's Short History of the Confederate States of America, 1861-1925 and it is written by Carole Scott.  Here is the book description from Amazon:

Other counterfactual histories are based on a concept from chaos theory called the butterfly effect. According to chaos theory, a very small difference in one initial condition of a dynamical system, such as a butterfly flapping its wings, may cause a series of changes that in the long run produce a vast change in conditions. "Clopton's History of the Confederate States of America, 1861 - 1925" by Carole Elizabeth Scott is different. So that the ramifications of several things that could have happened can be explored in one story, there are several precipitating initial changes in this story, and the story continues much further into the future than does the typical counterfactual history. This story is very unusual in that it takes the form of a textbook. A unique twist is that this counterfactual textbook was co-authored by a fictional college professor and a counterfactual version of Scott. History professors have biases. By taking the form of textbook, this story is able to demonstrate the likely difference between how victorious Confederate historians would have viewed given events and issues than have real world American historians. Real textbooks often have an appendix; so does this counterfactual textbook. The appendix provides biographical sketches of a number of real people. It provide readers with some insights into often not widely known aspects of the real world that guided the author in fabricating a reasonable alternative history.

Now I am not the biggest fan of American Civil War alternate histories, but I am looking forward to reading this book because of its history book format and the fact that I have already read it before!  Those interested can check out an earlier version of the idea that novel would become here.  This website was first created in 1997 and I first discovered it when I was a teenager obsessed with worlds that weren't.


* * *
Mitro is founder, editor and contributor of Alternate History Weekly Update. When he is not busy writing about his passion for alternate history, he spends his time working as a licensed attorney in the state of Illinois and dreams of being a published author himself one day.
Posted by Mitro at 3:38 PM