Well, it's a few days before Christmas and we're talking alternate history. That can mean only one thing -- the annual viewing of It's A Wonderful Life with Jimmy Stewart and Donna Reed. Yes, the original, preferably not colorized. And contrary to rumors, the movie is not 'retiring' on its 65th birthday (this week, on Dec. 19)! But I digress.

This movie is a classic using the alternate history genre to teach a lesson. In this time of year, when joy and peace is supposed to be the norm, there is an increase in depression and even suicides among seemingly normal folk. Such was the case with the fictional character of George Bailey, president and CEO of his family run "Savings and Loan." The Savings and Loan was a service much like the "Credit Unions" of today, but dependent on banks to handle most of their money. When a large deposit is lost at the greedy Mr. Potter's bank, Potter takes the opportunity to ruin his 'competition' and George Bailey take it hard, even to the point of seeking to jump off a bridge to kill himself.

Unknown to him, his family is worried about him and prays for his safety. Clarence, an angel 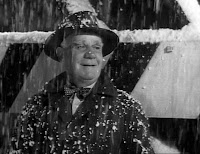 with no wings, is sent to save George from himself. When George jumps in the water to save Clarence instead of to kill himself, he confides with the wet angel that he wished he had never lived! Apart from Clarence having just been saved by the man, he figured in a moment of despair, he was not worth much! How often does this thought come to us in times of trouble? We begin to consider that things would be so much better for those around us if we weren't around. We might not consider suicide - since we value life itself - but we are willing to consider "non-existence."

But, ah! What a mistake that is! Any reader of alternate history - and especially writers of alternate history - knows that a little thing like the absence of an "important" person can change the course of history for perhaps the whole world! But what of the normal guy trying to make ends meet? How could his absence make a difference. George Bailey is given a chance to see that world that he "wished" for. And it wasn't pretty. Of course, his reason for staying around and running the Savings and Loan was so that people would not be controlled by Potter. And alas, that is what happens as Bailey enters the alternate present. However, it was not just the present that he is shown. Clarence gives him a glance at his past - or the past as it would have been if he had not been born. The seemingly little things he did - from saving his brother when he fail through the ice to courting his wife - made a big difference.

Each person is on this earth for a purpose, and contemplating what is might have been is a way that we can see what that purpose is. It forces us to consider the reason we did what we did, and the consequences (good or bad) of those actions. Little kindnesses turn the despondent stranger from a course of destruction, perhaps; or meeting our spouse turns that person from a life that would have been a disaster with someone else! It makes us appreciate our relationships with family and acquaintances alike. George Bailey finds out that even though he had lost a small fortune of other people's money, those same people - people that he had helped with a loan at just the right time - came through for him when Potter had the police converging on him. He had friends that he did not even know!

Our lives might not touch as many people as Bailey's did, but the very fact that we interact with others means that we do make a difference. Let us learn from this classic piece of alternate history. When we tend to feel sorry for ourselves, let us instead think of others. Let this be as season of giving rather than getting. It may not be "about us," but it would not be the same without us.
Posted by Henry Martin at 9:43 PM

Email ThisBlogThis!Share to TwitterShare to FacebookShare to Pinterest
Labels: depression, It's a Wonderful Life, Jimmy Stewart, making a difference, meaning of life