Review: "Pride and Prejudice and Zombies" by Seth Grahame-Smith 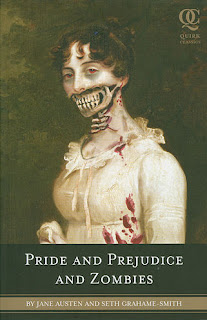 This is my contribution to our "Profiles of Terrifying Alternate Worlds" campaign we have going on here at Alternate History Weekly Update.  Enjoy!
Let me start by painting a word picture: it is 19th century England.  ﻿You are immersed into the manners, morality and rituals of the English landed gentry.  In the fictional town of Meryton in Hertfordshire, a young woman finds herself torn between her own desires and what is expected of her by society.  Also there are zombies and the young woman's Shaolin training comes in handy since  we all know that the best way to kill a zombie is to go for the head.
This is the world of Pride and Prejudice and Zombies by Seth Grahame-Smith and Jane Austen.  A mashup of Austen's classic 1813 novel, the world can be considered an alternate history or at least deserving the title of "honorary alternate history".  First, the fake group discussion questions at the end seem to suggest that in an alternate timeline the publishers of the novel convinced Austen to include zombies in the novel.  This alternate Pride and Prejudice could have been the Night of the Living Dead 150 years earlier.
Second, Seth (I am too lazy to call him by his last name) created a plausible setting and convinced me that the tactics used by early 19th-century England would be implemented in case a zombie outbreak in the British isles.  From the walled cities, to the martial arts training in the Orient and the great fire pits for disposing the dead, all of these precautions convince me that the England of OTL could have weathered a zombie apocalypse.
It is because of this attention to detail that I like Pride and Prejudice and Zombies.  So many zombie stories in the genre make the mistake of just taking the plot of World War Z and placing it in a different time period.  Rarely does an author actually sit down and think about what would the people in different historical eras do to fight the undead menace.  Of course I could be wrong and he just thought it was cool to have English nobles with private ninja armies.
Still as a zombie fanboy (the worst kid of fanboys, they tend to have a lot of guns) I was turned off by the fact that these zombies were more of the "Brrrrrrrraaaaaaaaiiiiiiiinnnnnnnnnnssssssss" kind then the traditional Romero slow walkers.  Nevertheless the dark humor and excessive violence more than made up for it.  More importantly, you do not have to have read Pride and Prejudice before reading this parody, but if you are a fan of Austen's novel you will probably enjoy this parody even more.
A bloody good time for any alternate historian or horror fan.
* * *
Mitro is founder, editor and contributor of Alternate History Weekly Update. When he is not busy writing about his passion for alternate history, he spends his time working as a licensed attorney in the state of Illinois and dreams of being a published author himself one day.
Posted by Mitro at 10:50 AM