The Update had one of its best days in terms of page views last Tuesday. It began when a person named "seemoreglass" posted a link to One Way to Divide America: Ethnicity on MetaFilter. In that single day we got 4,837 page views and the link to the article spread to several Tumblr blogs. Pretty impressive for a one-mad blog in a niche market.

So what did I learn from the experience of going viral? Well I did see a slight increase in ad revenue, but barely saw any interest in any other articles on The Update or any surge in social media followers. Although there were a lot of comments on the actual MetaFilte page, I didn't read much of them, mostly because they started turning nasty early, but I did read some new comments we got on the article page itself and was not impressed by what I saw.

The oddest thing about all this is that it happened with an article I posted on February 8, 2012. That was more than a year ago and it only got noticed now. I guess we can write this off as one of those odd phenomenon's of the Internet. You just never know when something is going to become popular.

Barring any new entries into the DBWI writing contest, this week's post schedule is pretty much set in stone. New Releases return's to its regularly scheduled slot tomorrow and Wednesday, which happens to be the 2 year anniversary of The Update, I will publishing a short letter to the fans looking both into the past and future. Thursday we get to read Dimas Aditya Hanandito entry into the DBWI writing contest and Friday we get two articles on the Before Watchmen prequel series from Sean Korsgaard.

I have to warn you that the rest of this Weekly Update will focus on video games since E3 happened last week. Since this is primarily a literary blog, however, I am going to start by talking about Pan Macmillan’s Tor imprint acquiring The Invisible Library by debut UK novelist Genevieve Cogman. Senior Commissioning editor Bella Pagan bought World rights in this novel and two others by Cogman from Lucienne Diver at The Knight Agency.

The concept behind these books has inspired comparisons such as “Doctor Who with librarian spies”. Here is how the story is described:


The redoubtable Irene is a secret agent for the ultimate inter-dimensional library, a covert organization that gathers knowledge from parallel worlds. Irene’s latest assignment posts her, and her enigmatic assistant, to an alternative Victorian London. Their goal being to retrieve an extremely dangerous book. But when she arrives, it’s already been stolen – and soon she’s up to her eyebrows in thieves, murderers and secret societies – with a dash of the supernatural in store.

Cogman said: “I’m incredibly excited that Tor will be publishing my books – I still can’t quite believe it’s true. I’m honoured to be in the company of authors such as Paul Cornell, Charles Stross, and other brilliant writers. I really hope that other people will enjoy this series, and be entertained by the Library.”

Pagan commented: “This book brings a new urgency to the term ‘must read’ – hugely entertaining, clever and a lot of fun. I just fell in love with the writing, which reminded me of Jasper Fforde by way of Gail Carriger’s Soulless, with the humour of Ben Aaronovitch.’

Still the concept sounds interesting and I think alternate historians, being the voracious readers that we are, might get a kick out of librarians battling it out across the multiverse.

Alright, I promised video games and lets start with the one blowing up the Internet: The Order: 1886. The game is being developed by Ready at Dawn and published by Sony Computer Entertainment which will be released exclusively for the upcoming PlayStation 4 (PS4), which sucks because I am an Xbox guy. Announced at E3, The Order is set in alternative Victorian Era London where the industrial revolution came about as an effort to win a centuries-old war against inhuman enemies (because humans just got tired of fighting each other, I suppose). Let us take a look at the trailer as it is revealed at E3 (the crowd sure does seem excited):
So the trailer gives us a glimpse at this steampunk, horror game featuring some epic mustaches and Victorian airships (at this point I am really upset with you Limeys for not inventing these earlier). We, of course, see the futuristic weaponry the genre is known for, including what looks like a Tesla coil gun, but whether it will be a poor copy of BioShock Infinite or a great game on its own remains to be seen. Exactly what gameplay is like is still unknown, although one commentator suggests the enemy may be werewolves and you will have to hunt them down in co-op. The game does not have a release date as of yet and in fact has been in development hell for years.

Want to learn more? Check out an interview with CEO of Ready at Dawn/Creative Director Ru Weerasuriya. He also spends some time breaking down the game's alternate history over at IGN. 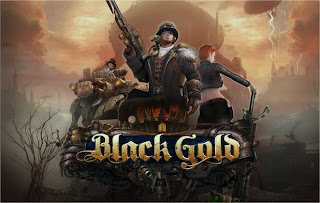 The next big game to come out of E3 for alternate historians is the steampunk, fantasy Black Gold. Being produced by Snail Games, it is an MMORPG PC game inspired by the myths and fairytales throughout Northern Europe. Black Gold combines the magic-filled world of fantasy with the mechanized, gothic world of steampunk.

The game setting itself is divided between six races, each on the side of steam or sorcery. Players will be able to trigger more than 3,000 dynamic events and actions that can change the game world. Additionally, characters will have the ability to change forms and drive giant armored mechs in combat (or elephants). Black Gold also features cross-genre gameplay, including both first-person (FPS) and third-person shooter (TPS) elements.

The game sort of reminds me of Arcanum, a game I have only a little experience with after playing the demo once. From the screenshots it certainly looks impressive, but the fantasy elements are not my thing. The Order is still on the top of my list, unless...

More on Wolfenstein: The New Order

...you let me kill Nazis in a timeline where the Axis won World War II. 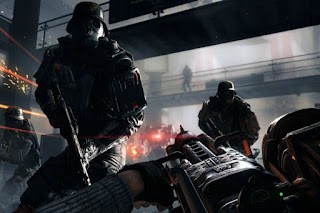 Although I've talked about this game previously, for those who don't know, Wolfenstein: The New Order is an upcoming first-person shooter video game in development by MachineGames to be published by Bethesda Softworks for most platform. The New Order is the ninth installment in the Wolfenstein series and is set for launch later this year.

More information on the game continues to be forthcoming. For example, you can check out a walkthrough of the game over at Game Trailers. You can also learn just how seriously MachineGames and Bethesda are taking the alternate history of New Order.

Am I done with video games already? O well, let's look at some things you can do in the real world:

Also this is the last day to see a steampunk-ified version of Into the Woods at Lake City Playhouse in Idaho.

July 7: The Guildhall in Cambridge, UK will be host to "a world in which Victoriana and steam-powered inventions collide spectacularly with ideas of the future."

August 1: Deadline to submit your entry for Dark Hall Press' ghost story competition. Max word count is 4k and I actually plan to submit a story that I hope to finish writing this week.

5 Huge Mistakes Nobody Noticed for a Shockingly Long Time by Evan V. Symon at Cracked.
5 Lies About the Vietnam War You Probably Believe by Alex Hanton, Eric Yosomono and Adam Page at Cracked.
Alternate History: What If Henry Ford, and Not Edsel, Had Died Young? by Ronnie Schreiber at The Truth About Cars.
Author Nick Valentino announces arrival of new steampunk novel by Deborah Smith Ford at Examiner.
George Orwell back in fashion as Prism stokes paranoia about Big Brother by Stephen Moss at The Guardian.
Glenn Beck's Counterfactual Inanity by Gavriel D. Rosenfeld at The Counterfactual History Review.
The H Word: Lovecraftian Horror by W.H. Pugmire at Nightmare Magazine.
Historical Fiction / Alternate History by Alex at Remind Me Twice.
How to build a Roman future by Alison Morton at Modern Papyrus.
If only Britain had joined the euro by Will Hutton at The Guardian.
Iraq’s Assault against the Kurds by Joost Hiltermann at World Peace Foundation.
A Ku Klux Klan rally kept Patrick Ewing from going to the University of North Carolina by Dan Devine at Yahoo!
Preliminary notes on the "Laonomicon." Or: Forbidden Knowledge in Laos? by Bryan Thao Worra at On The Other Side Of The Eye.
Romans and steampunk? by Daniel Ottalini at Alison Morton's Roma Nova.
Sobel Wiki: The old switcheroo by Johnny Pez.
Stories Outside History by Daniel Abraham by Daniel Abraham at nerds of a feather, flock together.
An Unusual "What if?" About the Battle of Tours from 1939 by Gavriel D. Rosenfeld at The Counterfactual History Review.
What if Shakespeare wrote Star Wars? "Alas, poor Stormtrooper!" by Meredith Woerner at io9.

In Thunder Forged by Ari Marmell at Thinking about books.
The People's Will by Jasper Kent at Falcata Times.

Superman & The New 52 Reveal Alternate History to World War 2! by fourcolors at pressdemocrat.com.

“The Airship Potemkin” review by Roger Ebert at Not by the Direct Method.

Meet the Hand-drawn Dieselpunk World of Terminus at NAG.

Laura Andersen on the Tudors and Alternative History by Mark Evans at Historical Novel Society.