The President That Never Was: A DBWI Alternate History by Tyler “tbguy1992” Bugg 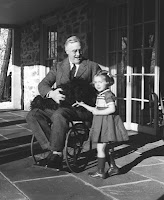 On June 7, 2013, the Chairman of the Australian based International History Council, Sir Alan Dearing, held a discussion with author Ken Harper, the writer of a new book, The President That Never Was, a substitution history of how forgotten New York Governor Franklin Delano Roosevelt nearly became the President of the United States, and what his role in America and around the world could have been. This is a small portion of the two hour interview that was held in Sydney, and to be fully printed in the July edition of the Historians International Monthly.

DEARING: What exactly is the basis for this book?

HARPER: When I was still in the United States studying at Yale, I came across the papers of a former governor of New York State, Franklin Delano Roosevelt. He was running for the Presidency in 1932 as a Democrat; however the revelation that polio had crippled his legs and prevented him from walking without iron braces had scuttled his chances for running. The Democratic Party instead turned to John Nance Garner, who won against the incumbent Republican, Herbert Hoover. After reading through the papers, I began to envision a world where Roosevelt was elected, and the consequences that would have.

DEARING: Despite his disability, you paint a very robust and upbeat Franklin Roosevelt.

HARPER: Even before he contracted polio, he was a very energetic man, serving as Assistant Secretary of the Navy in the Great War and in other high government positions. After his illness in the 1920s, Roosevelt would work twice as hard, eventually becoming Governor of New York despite his illness. However, the revelation that he was confined to a wheelchair ended his chances to be President, and he would retire to a comfortable life at his family’s estate at Hyde Park, as well as his secondary home at Warm Springs, Georgia, passing away in his sleep in 1952.

DEARING: The president that could have been you proposed in your story seems almost superhuman, getting things done that many presidents had failed to do. In comparison to what actually happened, why do you say this, when even right now the US is struggling in yet another Depression?

HARPER: He was a very charismatic man, giving one liners that, though most are forgotten today, were both uplifting and steadfast in his time. One of my favorites, which he wrote to a family friend in 1935, was “The only thing you and I have to fear is fear.” In his short run for President, he never made any specific policy announcements, besides that the Great Depression must be fought, and that America was great, instead saying that he was willing to try whatever he could. I think through his words alone, he could have convinced the US that he would do whatever he could to rectify the Great Depression, though whether he could or not would never be seen. President Garner, though a very capable man, did not have the way with words as Roosevelt did. The programs he got through Congress in his first year, like Social Assistance and the Jobs Council, were very much the result of compromise with the strong Republican minority and conservative Democrats, which the liberal Roosevelt would not have tolerated to the same degree. While America was lifted out of the Depression by 1936 in our history, partially from massive make work projects and cutting taxes for businesses to virtually nothing, I would argue that under Roosevelt it could have happened sooner with more proactive, government supported actions.

DEARING: Perhaps the biggest change, and the one that has had many critics complain, was the foreign policy of your fictional presidency. Why do you think that he would have been very proactive in external affairs, going so far as to aid the British in their doomed war effort, and picking a fight with Japan?

HARPER: I will answer the second part of the question first. It wasn't necessarily that Roosevelt picked a fight with Japan that it looks like he did in my story: in the various crises that occurred in the 1930s that damaged the relationship with the Empire and America, such as the sinking of the Panay in China during the 1936 invasion, the occupation of French Indochina and the Dutch East Indies would have been met with economic countermeasures, such as in embargo of oil and steel. Now, not to say that it is right or wrong, but President Garner, in his view that America was not strong enough, nor cared to fight an overseas enemy, instead continued diplomacy with a militant Japan. This would eventually end American involvement in the Philippines, which almost promptly fell into the East Asia Co-Prosperity Sphere as a bloodless triumph. While we are close allies with Japan today, in the alliance brokered by President Joseph P. Kennedy, Jr. in the 1960s, before then it looked very much like war, or at least a vicious trade struggle, would ensue.

As for Britain, my President Roosevelt was taking a long term view that some American politicians to this day never did: Britain was the one bulwark that could protect America from a cross-Atlantic attack, with the Royal Navy of the 1940s and  their strategic position against a Nazi Europe. It is clear that Prime Minister Winston Churchill, though leader of Britain for a few months after the “Great Appeaser” Neville Chamberlain’s death in November 1940, had depended on the US’s involvement in the Western European War to prevent the spread of fascism. Garner, a great domestic president, was pushed around in foreign affairs by the dictators of the era, and the American people, led by the likes of Charles Lindbergh, had no interest in overseas military intervention. It would come back to haunt us in the Hot Peace, when we had few allies to turn to against a militant Europe and Soviet Union.

DEARING: Now, the diplomatic moves that your Roosevelt put against Japan can be seen as cause for war. Yet, you think that Japan would have settled it peacefully, and not actually engaged us in war. Why do you think so?

HARPER: The Japanese leadership of the 1930s and 40s would, and should, have known that America was a sleeping giant, one that could use its vast economic might to crush them in any total war. Roosevelt was known as a man that would not back down unless he got what he wanted, or if the greater majority of the public disapproved of it. I think he would have been prepared to go to war with Japan, but only after getting the American people to support him. That was going to be the big issue, getting the American people to support a war that they otherwise had no interest in. It wasn't like Japan had the capabilities in the 1940s to launch an attack against us, which would perhaps be the only way to get the American public of the Thirties and Forties interested in wars on the other side of the oceans that protect us.

DEARING: In your analysis, you think that Roosevelt would have wanted to run a third term. No president has ever succeeded in getting a third term, but what would make you think he would?

HARPER: Roosevelt’s uncle, Theodore Roosevelt, was the closest to ever winning a third term in 1912, so I think it runs in the family. I’m sure the desire to lead the nation, not for selfish reasons but because they feel that his job would not be done, would have convinced him to try for a third term. However, I highly doubt the American people would have went along with that, and an effective Republican campaign, like that of Charles Lindbergh in 1940, would have painted Roosevelt as a dictator like those he opposed, trying to keep himself in power. He would have run, but I highly doubt he would have won.

DEARING: Now, this book has been banned in both the Third Reich and in the Soviet Union. You paint a very bright picture of the Soviets in your book, saying that Roosevelt would have supported the Russians if the Nazi’s had invaded. What do you have to say about that?

HARPER: The Soviet Union was in greater danger than they could have realized in 1941, before the failed attempt at a British Invasion in the west distracted Hitler. Even reading Mein Kampf, it’s clear that Hitler wanted to attack and annex large parts of Russia, but the long drawn out battle with England sapped his and Germany’s strength, and Hitler’s death in 1946 before Germany was fully recovered from the war ensured that he would never attack the Soviet Union. The alliance the two established in 1939, and reaffirmed every few years, seems to be a historical certainty, but I think the Soviets got off lucky.

As for the censorship, I do not mind. The Third Reich and the Soviets are, if maybe at one point at different ends of the political scale, are now almost virtually identical in their methods of government and education. I cannot see them understanding that this kind of fiction is not only plausible, but could have been so likely to happen.

DEARING: One final question: if Roosevelt had been president, exactly how great would he have been ranked?

HARPER: That is perhaps the hardest question. It completely depends on how successful his domestic policies were, and if he kept America out of war. I’m sure he would have repaired the economy as quickly as he could, which alone could have cemented his status. However, he did seem more bellicose in international affairs, which, while he may have gotten a war to fight, it would not have been what the American people wanted. So, if he repaired America and served two terms without sparking a war, I’m sure he would be recognized as one of the Greats, like how we see George Washington, Abraham Lincoln and (arguably) Jimmy Carter today. If he did get us in a war, it depends on the circumstances. I highly doubt he would have because he was militant, but because he thought that it was right. The people of the time may not have recognized it, but history always will.

Tyler "tbguy1992" Bugg is an aspiring writer, history student, gamer and Canadian, and somehow managed to merge all four into his current project, a Fanfiction set in Manitoba in the Fallout gaming universe. His first published short story, "From Enigma to Paradox" can be found in the Alternate History Anthology Substitution Cipher. He is also barely on Twitter.
Posted by Mitro at 11:00 AM