The seat on the window side of the bus was his deliberate choice. He could sit back and relax, stretch his legs a bit, and let his mind free for several hours. At least that was what he intended. As the rugged Fiat engine began to growl, again he pondered his decision to leave for Milan. How many times had he done that since he slammed his parents’ door shut? He lost count.

Raffaelo was raised an obedient child, a boy with fervent belief on the ideals of Tito. When your father worked in the police force, you were expected to become a role model of the society. Il figlio del maresciallo. Break the law, and you were out of the family. Everybody in the household must be citizens with flawless crime records. In a normal society, he would have no objection to such lifestyle. But in a society where they suppressed your thirst for knowledge, he found out it was extremely difficult to be adherent. He never regretted his decision to beat that insolent Yugoslav student after the conference. Who cares that bastard was the son of an influential statesman back home? Even his father’s fury would not undo those three or four teeth. Until last year, never did he know that being an unquestioning subject of his family and the Republic was simply contrary to his destiny.

It was a cloudy Friday on December. He didn’t know whether his father had announced a country-wide search for him, and could not care less. Giosué had notified him who to contact upon his arrival in Milan, an associate of Pinuzzu with whom he would carry on the mission. This friend had connections with families in Palermo, he said. Connections which would prove to be quite handy in providing supplies necessary for his job, he told.

Unlike him, Giosué might have had better life in the south. At least they were free to read anything they like, wear anything they want, buy anything they need. Sometimes he wondered how life blatantly presented inexplicable peculiarities even by the slightest of differences. He wasn’t envious, merely baffled on how a regime transformed entire families and societies. The Republic had more people, more factories, and more raw materials. By the time they had begun filling their steel factories with workers from all over the country, the majority of Southerners were still fishermen and farmers. By the time they had taken their automobiles of various brands to measure their newly built roads, the Southerners were still on their horse carriages and carts.

It all changed during the last two and a half decades.

He wasn’t born by then, neither did Giosué; they didn’t know much. What he knew from underground newspapers he secretly read was, for example, that Florence used to be the center of fashion industry. Now, the city only served as a major textile producer weaving hundreds of uniforms every day. No design, no taste. Ironically, the city used to house names like Ferragamo, Prada, and Gucci. These days you couldn’t see any of them in the streets of Florence. Nobody would have been able to afford them either. Instead, try Naples or Rome. There, you could find even the most elaborate fashion from many corners of the world.

As he and Giosué were born after the divide, they knew very little what happened before. Giosué was a bit luckier; he got himself some good books. Especially for a son of a bureaucrat like him, access to books in Naples was very easy. At least easier that it was in Florence, Raffaelo thought. Then he remembered when Giosué recounted his experience at some kind of hip restaurant in Naples, but he failed to recall the name. McDavids? McDaniels? Whatever it was, Giosué said the Americans brought it there. It was all about the Americans. As a bureaucrat, Giosué’s father had lot of contacts with Americans. Apparently, his son inherited the trait. Although Raffaelo was never sure about Giosué’s disposition to the Americans, he personally didn’t trust the Americans more than the Yugoslavs.

He and Pinuzzu often disagree on principal issues such as whether free market or central planning was better (Pinuzzu was a great admirer of Marx), but for this matter he was certain Pinuzzu would side with him. The Sicilian had a bitter resentment against the Americans, a hatred brought from the previous generation. Sicilians like Pinuzzu would never forget what the Americans did in Canicattì. The incident fueled the rage of the entire island, and a violent uprising soon ensued. They were well rewarded as the revolt concluded with the Sicilians proclaiming their own state, free from American “guidance” other southern regions received at that time. This year they celebrated their twenty-second anniversary in midst of economic mismanagement and internal strife between the families.

As the bus entered Emilia-Romagna, Alessandra’s oval-shaped face appeared in his mind all of a sudden. There were little features not to be admired from it. Like those soft cheeks, often reddened when she spoke with zeal; and those lips, equally tender as they were eloquent. Her radiant green eyes, reflecting the library of knowledge she had, was what Raffaelo liked the most from the Sardinian girl. The last thing he saw of her was her wind-blown wavy hair on top the slender stature, blond with streaks of black, as she went to board the plane to Cagliari.

To him, Alessandra was an exceptional young woman in many respects. Her mother had concerns of her pursuing higher education and would prefer to get grandchildren, but she continued nevertheless thanks to her father’s support. Her father himself often had quarrels with local PSd’Az members, to the extent that he brandished a shotgun when they remarked how Alessandra would be “a prime Sardinian woman if her brain wasn’t bigger than her breasts”. Shortly after, he sent his only daughter away to Florence to attend a conference participated by students from universities in four peninsular nations with a special delegation from the University of Belgrade.

At the conference, she didn’t disappoint at all. Alessandra dazzled many other students and participants with her intrepid speech about il ricongiungimento, spoken in impeccable Italian. She would go home with pride, presenting her father the “outstanding delegate” award. Raffaelo had never met such an outstanding female like her in his life, and was immediately enthralled by her gracefulness. She shared his dreams of becoming one nation again, along with Giosué and Pinuzzu.

And today would be the day.

Several hours later, he got off in an esplanade across a colossal, cubical edifice in the heart of Milan. Raffaelo examined the leather briefcase Pinuzzu’s associate gave to him as the latter drove away in his brown Alfa Romeo. Then he checked his watch; just a minute past four-thirty in the afternoon. The others must have been ready by now. He casually crossed the street; his hands firmly gripped the briefcase. He recalled his visit to this place years ago with his family, when they had this little vacation in Milan. The alphabets over the front entrance read “Banca Nazionale dell’Agricoltura”, it hadn’t changed since. Ensuring he had the briefcase with him for the last time, he stepped in. 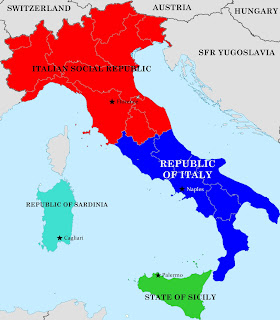 Dimas Aditya Hanandito is s junior ucroniador from the Far East currently in his final years of college who sometimes delves into the alternate past out of boredom of the present reality.
Posted by Mitro at 11:00 AM