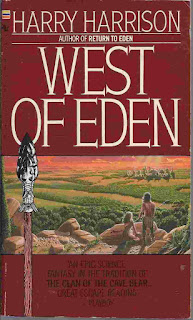 The 1980s were a great time for alternate history. I know some people give credit to Leinster, Moore and Dick for starting the alternate history genre, but if they started it, than the authors of the 1980s perfected it. This was an era were a new crop of writers were entering the speculative fiction genre with backgrounds in history, instead of science and engineering. They used their knowledge of the past to craft new works of science fiction and to fill out the tiny library of alternate history. Authors who were part of this era included Harry Turtledove, SM Stirling and, of course, the late Harry Harrison.

Harry Harrison has contributed a lot of works to the alternate history genre, especially through his "trilogies". There is the fun historical fantasy Hammer and the Cross trilogy (which I had a blast writing in) and the notoriously implausible Stars and Stripes trilogy. There is one more trilogy, however, that we have not discussed yet: the Eden trilogy. This series is set in a world where the meteor that wiped out the dinosaurs (which for some reason Harrison stated it hit Iceland in our timeline and not the Yucatan...was this a popular theory?) never happened and thus Earth's entire evolutionary history is changed leading to a world where a sentient race of amphibious reptiles that walk upright compete with humanity. If this seems implausible...you're right, but more on that later.

The Eden trilogy began in 1984 with the publication of West of Eden. This tells the story of a young hunter (or Tanu) named Kerrick who is captured and raised by the Yilanè (the aforementioned smart lizards) after they wiped out his family and tribe. At first Kerrick thinks of nothing but escaping, but as he learns the Yilanè language to survive and comes to understand more of their culture, he begins to forget his "humanity" (the quotations are significant, but again more on that later) and sees himself more like a Yilanè and less like a Tanu. The Yilanè, however, fear the walking/talking mammals enough that they seek to rid them from the continent they are now colonizing as longer winters threaten their homes in the Old World. A chance encounter with one of the survivors of these raids convinces Kerrick that his place is with his own kind and he finally escapes. The Yilanè, especially the ambitious Vainte and vicious Stallan, are not ready to let him go and chase him and his people across the continent. Meanwhile, Kerrick uses his knowledge gained from his years of captivity to better fight the Yilanè and eventually prepare the Tanu and their allies to take the fight to the invaders across the sea and drive them from their home once and for all.

A lot of stuff to unpack here, so lets begin with the Old World where the Yilanè are from. Without the extinction event, dinosaurs never died out and instead continued evolving and the Yilanè are a product of this. They have built an advanced civilization, but not with technology as we know it. Instead their civilization, which has existed for millions of years, uses advanced genetic engineering to create houses, tools, transportation and weapons made entirely out of organic creatures and materials, reminiscent of the Yuuzhan Vong from the old Star Wars Expanded Universe. If this sounds impossible without some sort of period where they first obtained a level of inorganic technology first, you are probably correct, but trust me, the craziness has just begun.

You see Kerrick and his people aren't human. They look like humans, talk like humans, think like humans and do all the other human-y things humans do, but they are not humans. In our world, humans as we know them evolved from apes in Africa, but in West of Eden the dinosaurs prevented mammals in the Old World from going down this evolutionary path...but not in North America. Yep, the Tanu are actually descendants from a North American ape/monkey that somehow managed to evolve into a human-esque species during a brief (relatively speaking) period of time when Central America was flooded and all of the dinosaur species had died out in North America, giving the Tanu and related peoples a chance to develop and later flee to the cold north when the dinosaurs eventually returned. Man, the stars really had to be aligned for evolution to create something exactly like the humanity of our timeline.

So in terms of plausibility, West of Eden is making Stars and Stripes look like historical fiction that Richard J, Evans would be proud of. So what about the story itself? Well actually it has a lot of similarities with the Hammer and the Cross trilogy. Protagonist hates invaders, but joins invaders and learns their ways, only to inevitably escape from invaders to lead his own people against them. The Yilanè even have a troublesome religious cult called the "Daughters of Life" that fulfills much the same role as the Way. To Harrison's credit, this series predates the Hammer and the Cross so he can be forgiven for being derivative. Nevertheless, the story wasn't bad, especially if you enjoy the older style of writing that emphasizes telling over showing. You learn about Kerrick's struggle as he finds himself stuck between two alien societies. Even with the death of his family, he struggles to sufficiently hate the Yilanè like the other Tanu and at times even sees some benefits to Yilanè civilization over the hunter/gather culture of the Tanu. Furthermore, I like societies that use living things as machines and such. It might not be practical or plausible for that matter, but its a cool aesthetic that appears again and again in genre fiction, including alternate history, such as Scott Westerfeld's Leviathan trilogy.

I can see why a lot of people won't like this book and I am not going to try and push it on you. That being said, I enjoyed it and will probably read the next book, Winter in Eden, when I get a chance. Harrison may not always tell a plausible story, but at least he tells an entertaining story. If you want to witness a clash between two alien species take place on our own planet, go check out West of Eden.