The Gradual by Christopher Priest

Alesandro Sussken is a composer living in Glaund, a fascist state constantly at war with another equally faceless opponent. His brother is sent off to fight; his family is destroyed by grief. Occasionally Alesandro catches glimpses of islands in the far distance from the shore, and they feed into the music he composes.

But all knowledge of the other islands is forbidden by the military junta, until he is unexpectedly sent on a cultural tour. And what he discovers on his journey will change his perceptions of his home, his music and the ways of the islands themselves. Bringing him answers where he could not have foreseen them.

A rich and involving tale playing with the lot of the creative mind, the rigours of living under war and the nature of time itself, this is multi award-winning, master storyteller Christopher Priest at his absolute best. 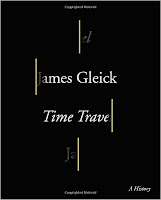 From the acclaimed author of The Information and Chaos, here is a mind-bending exploration of time travel: its subversive origins, its evolution in literature and science, and its influence on our understanding of time itself.

The story begins at the turn of the previous century, with the young H. G. Wells writing and rewriting the fantastic tale that became his first book and an international sensation: The Time Machine. It was an era when a host of forces were converging to transmute the human understanding of time, some philosophical and some technological: the electric telegraph, the steam railroad, the discovery of buried civilizations, and the perfection of clocks. James Gleick tracks the evolution of time travel as an idea that becomes part of contemporary culture—from Marcel Proust to Doctor Who, from Jorge Luis Borges to Woody Allen. He investigates the inevitable looping paradoxes and examines the porous boundary between pulp fiction and modern physics. Finally, he delves into a temporal shift that is unsettling our own moment: the instantaneous wired world, with its all-consuming present and vanishing future.

Avenging Steel 5: The Man From Camp X by Ian Hall

It is October 1941... German troops have held Britain for over a year.

James Baird, a 21 year old student has joined the SOE and has proven his worth in the resistance against the Germans in Edinburgh.

Unknown to James, his superiors have plans for him. It is time to expand his training; the SOE are sending him to Canada's Camp X.

For the first time in his life; James is going overseas. He thinks he's going for a medal ceremony or something...

What he doesn't know... he's about to enter the most rigorous six weeks of his life... and that's just the beginning of his adventure.

Avenging Steel 5 is the latest in the saga of James Baird, Secret Agent.

In long novella parts, we follow James's story as a nation begin to rebel against Nazi jackboots.

Get your teeth into a brand-new version of World War 2.

During the Alaskan gold rush, a woman pursues a destiny that will change the world in this alternate-history novel from a sci-fi legend.

In the tradition of Robert Heinlein (Starship Troopers, Stranger in a Strange Land), multiple Hugo and Nebula Award winner Joe Haldeman set a new standard for military science fiction and hard sci-fi with The Forever War and his phenomenal Worlds series.  Now the Science Fiction Writers of America Grand Master dabbles brilliantly in alternate-history fiction with the world-altering adventures of a remarkable woman during the gold rush in late nineteenth-century Alaska.

Sent from her Georgia home to Philadelphia to escape the carnage of the Civil War, Rosa Coleman studied astronomy and mathematics, ultimately settling into a new life as the wife of a wealthy man and mother of young Daniel. But when she discovers an unforgiveable secret about her reprobate husband, Rosa takes the boy and flees to the West on a desperate escape that takes them from Dodge City to San Francisco one step ahead of the Pinkertons hired to bring them back home.

On the run in a strange and exhilarating new world, Rosa and Daniel find a haven where they might never be found: the wilds of Alaska among the dreamers drawn to its magnificent wilderness by the promise of gold. It is here that her spiritual guide first appears to Rosa in the form of a raven—an incarnation of the trickster god of Native American and Eskimo lore—suggesting that her destiny lies not in sparkling riches but in something far greater. This mystical harbinger has come from a distant, alien place, and will set her on an astonishing course . . .

A magnificent blending of historical and speculative fiction, Joe Haldeman’s Guardian is a breathtaking departure for the author whom Peter Straub calls “one of our most aware, comprehensive, and necessary writers” and David Brin praises as “one of the best prophetic writers of our times.”

The war between Athens and Sparta is over.

But not for Demosthenes of Athens, who has but one purpose: kill every Spartan. In his possession is a weapon that might achieve it, the living, unstable weapon which fell from the stars, Thalassia. At present, she lies dead, but that is sure to change. Demosthenes will need her help, for Sparta has a weapon just as deadly in the form of Eris, the white witch who takes her name, not without reason, from the war-god's slaughter-loving sister.

The pre-order sale has ended. BUT... sign up now at IRONAGE.SPACE and start reading this book immediately with a 50% Preview Edition. Then I'll send you a reminder to come back & buy when the price is $2.99 again starting 9/24.

The Hellennium takes place in an ancient world depicted with brutal realism, weaving threads of cosmic SF into bloody and graphic historical fiction.  At the heart of the series is the ever-evolving, dysfunctional relationship between Demosthenes and Thalassia, whose 'anti-romance' is destined to leave a trail of slaughter and ruin down the centuries.

If you're a fan of David Drake's Northworld series, or Gene Wolfe's Soldier series, you'll want to join Demosthenes and Thalassia as they cut a bloody path of destruction through the ancient world. Frequent readers of David Weber, David Gemmell, Michael Moorcock, and even Bernard Cornwell have also found much to love.