A Second Chance: The Chronicles of St. Mary’s Book Three by Jodi Taylor

The third book in the bestselling British madcap time-travelling series, served with a dash of wit that seems to be everyone’s cup of tea.

Behind the seemingly innocuous facade of St. Mary’s Institute of Historical Research, a different kind of academic work is taking place. Just don’t call it “time travel”—these historians “investigate major historical events in contemporary time.” And they aren’t your harmless eccentrics either; a more accurate description, as they ricochet around history, might be unintentional disaster-magnets.

The Chronicles of St. Mary’s tells the chaotic adventures of Madeleine Maxwell and her compatriots—Director Bairstow, Leon “Chief” Farrell, Mr. Markham, and many more—as they travel through time, saving St. Mary’s (too often by the very seat of their pants) and thwarting time-travelling terrorists, all the while leaving plenty of time for tea.

In A Second Chance, it seems nothing can go right for Max and her fellow historians. The team confronts a mirror-stealing Isaac Newton and later witnesses how the ancient and bizarre cheese-rolling ceremony in Gloucester can result in CBC: Concussion By Cheese.

Finally, Max makes her long-awaited jump to Bronze Age Troy, only for it to end in personal catastrophe. And just when it seems things couldn’t get any worse, it’s back to the Cretaceous Period to confront an old enemy who has nothing to lose.

Skyhorse Publishing, under our Night Shade and Talos imprints, is proud to publish a broad range of titles for readers interested in science fiction (space opera, time travel, hard SF, alien invasion, near-future dystopia), fantasy (grimdark, sword and sorcery, contemporary urban fantasy, steampunk, alternative history), and horror (zombies, vampires, and the occult and supernatural), and much more. While not every title we publish becomes a New York Times bestseller, a national bestseller, or a Hugo or Nebula award-winner, we are committed to publishing quality books from a diverse group of authors.

For 8 long years the Great War has raged. Blaise Maximillian has been there from the start. A bright-eyed and fearful young 2nd Lieutenant, the realities of war change him into a hard-bitten soldier and an even harder policeman. Leading men and women into battle, he confronts a German army that becomes ever stronger, ever more advanced.

Britain needs heroes. Heroes like Laura Miles and Wez Broglino, armour hunter-killers during the Siege of Paris, then agents of the resistance group called the 'Department of Accidents'.

This is alternative history as you'd never have thought.

In at the Death: Settling Accounts by Harry Turtledove 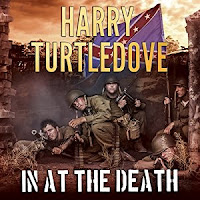 Franklin Roosevelt is the assistant secretary of defense. Thomas Dewey is running for president with a blunt-speaking Missourian named Harry Truman at his side. Britain holds on to its desperate alliance with the United States' worst enemy while a holocaust unfolds in Texas. In Harry Turtledove's compelling, disturbing, and extraordinarily vivid reshaping of American history, a war of secession has triggered a generation of madness. The tipping point has come at last.

The third war in 60 years, this one yet unnamed: a grinding, horrifying series of hostilities and atrocities between two nations sharing the same continent and both calling themselves Americans.

At the dawn of 1944, the United States has beaten back a daredevil blitzkrieg from the Confederate States, and a terrible new genie is out of history's bottle: a bomb that may destroy on a scale never imagined before. In Europe the new weapon has shattered a stalemate between Germany, England, and Russia. When the trigger is pulled in America, nothing will be the same again.