Map Monday: The Day After the World of Tomorrows​ by Rvbomally

Today's map is an odd one. It is essentially a remake...of a remake. I'll explain later, but for now, here is the map: 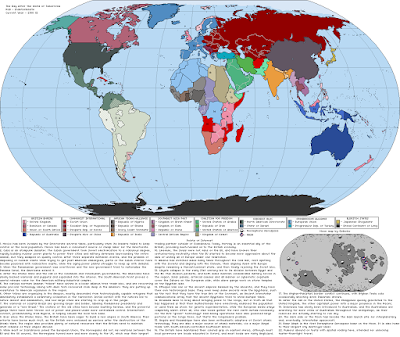 This is the "The Day After the World of Tomorrows"​ by Rvbomally, an alum of Map Monday. It is a remake of another map by Rvbomally, which was itself a remake of CastleGreifenghast's "The World of Tomorrows". Remakes and covers are actually quite popular in the alternate history community and I have featured a few in the past on Map Monday. It is nice how the alternate history community builds off each other and through this indirect collaboration, creates pretty awesome timelines.

As for this specific timeline, Rvbomally has essentially created a world where the different punk genres are at war. For example, Britain has adopted dieselpunk technology to maintain their empire, the Soviets are an atompunk society that worships Stalin, America is a cyberpunk society dominated by the alt-right, Europe is a biopunk society where the far left have gone too far, Central Africa is an imperialist steampunk state and Cambodia has clockpunk technology thanks to an ancient computer.

There are other references to punk literature scattered throughout the description (including references to Lovecraft) and it has the dystopia feel that Rvbomally's timelines are famous for, but I did find it amusing to learn that Arabia in this world is a secular democracy and the last bastion for freedom and liberty.

The map itself is well done in a Munroist-esque style. I especially like the smaller map of the Moon in the bottom right corner that has been appearing in a lot of Rvbomally's maps lately. I always enjoyed timelines featuring a more crowded Solar System and its good to see others agree with me that we need to plant the flag in more places. All and all, its a great timeline with an equally great map.

Honorable mentions this week go out to "Gepidia under control of King Mundus" by WotanArgead, "Greater Assyria" by Christodoulou1900 and "The Duchy of Calais" by Zrew33.

Matt Mitrovich is the founder and editor of Alternate History Weekly Update, a blogger for Amazing Stories, a volunteer interviewer for SFFWorld and a Sidewise Awards for Alternate History judge. When not exploring alternate timelines he enjoys life with his beautiful wife Alana and prepares for the day when travel between parallel universes becomes a reality. You can follow him on Facebook, Twitter, Tumblr and YouTube. Learn how you can support his alternate history projects on Patreon.
Posted by Mitro at 5:21 PM