Map Monday: And Mighty Be Her Powers by SRegan

My senior project in undergrad was a paper discussing the imperialist ambitions of certain members of the American Colonization Society (ACS), the organization that founded Liberia, and how they hoped to use colonies started by freed blacks to build an American colonial empire in Africa. So when I saw the below map by an already well-known alternate cartographer, I of course had to feature it: 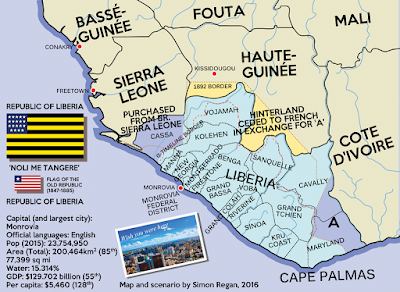 This is "And Mighty Be Her Powers" by SRegan. The details of this scenario are rather vague. Essentially the ACS is just more successful in encouraging blacks to settle in Liberia. Perhaps there were more slave revolts since during my research Liberia saw its highest rates of immigration from the United States after slave revolts, since reprisals against blacks led to many free blacks to flee to Liberia to avoid violence from whites. Anywho, SRegan goes on to say that Liberia distances itself from America, changes its flag to the colors of the Republic of Maryland and is today a minor African power.

I really do love the idea of a well-off Liberia, especially when you factor in how rough the last few decades have been for it. The map itself is well done in the way I have come to expect from SRegan. I especially like how he worked in the Republic of Maryland, which is one of those obscure former nations that only alternate historians ever bring up anymore. There is a lot to love about this map and I am happy to feature it on Map Monday.

Honorable mentions this week go out to "Greater San Diego Area Map" by Doctor President, "TL-191: Yankee Spring" by Rvbomally and "The World of SRegan's Strong West Wind 20 Years After the Second War of Irish Expansion" by Bruce Munro.