Map Monday: What Remains, Part 3: Last of the Vikings by Zek Sora

Picking today's map was easy since I already featured Part 2 on a previous Map Monday. So with that said, lets take a look at "What Remains, Part 3: Last of the Vikings" by Zek Sora: 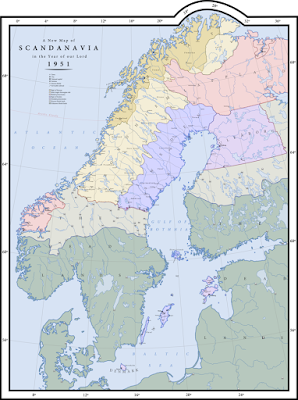 In case you weren't around for the last one, What Remains is a map series inspired by a mod for Victoria 2 where you can lead a 19th century nation through a zombie apocalypse. "Part 3" acts as sort of a retcon since it shows more areas of Scandinavia surviving. That being said, it is a lot more detailed than the world map we last saw, which really gives you a chance to see what a skillful alternate cartographer that Zek is.

As for the scenario, Scandinavia in the What Remains universe is divided between the British and Swedish blocs, with the British controlling all the territory bordering the North Atlantic thanks to the Royal Navy, with the Swedes in turn controlling the islands in the Baltic thanks to their navy. Presumably neither has the resources or will to kick the other out of the region, but as the zombie hordes are driven further back, perhaps open warfare against living humans may one day resume. Sort of the sad reality of this and other timelines like it.

Honorable mention this week goes out to "Greater Imperial Germany" by SoxWithPotatoes, "Der Kontinent Europa 1950 AD" by Falkanner, "Cover of  Randy McDonald's Tripartite Alliance Earth" by Bruce Munro and "The Colonial States of Australia in the Year 1700" by Doctor President.