So the idea of creating an alternate history based on a song isn't anything new (see Joe Steele by Harry Turtledove) but it is still relatively rare. Thus I was happy to see that the good folks at AlternateHistory.com are doing a map contest where maps are based on songs. This one in particular caught my attention: 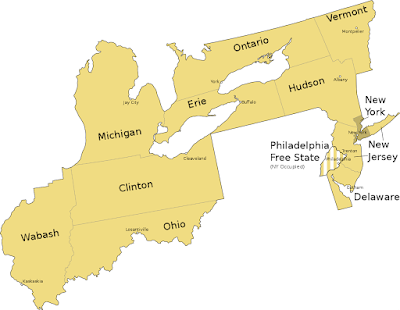 This is "New York State of Mind" by Stuyvesant and is based off the song of the same name by Billy Joel. There isn't a description yet for the map, but you can make some assumptions just by looking at it. For example, this appears to be a balkanized America timeline where New York did really well. In our timeline New York did claim much of the Great Lakes region, but so did a lot of states, like Virginia. Considering Virginia had much easier access to these areas, its a little surprising New York did so well, but maybe it will be explained by Stuyvesant in a later update.

The map itself is alright. Its very minimalist and you don't get many details of the outside world, but the colors are nice and the orientation is good. Sure this is a NY-wank, but its a well done NY-wank.

Honorable mentions this week go out to "The Hellenic Confederation, 250 BCE to 525 AD" by Rebecca "Upvoteanthology" Stirling, "The Commonwealth" by Zek Sora, "The Federation of Columbia" by FMannerly and "TL-443 Ernst sein ist alles" by Zauberfloete​.