I get a lot of comments after I review something where people question my overall opinion of an alternate history, especially when I give a bad review. Let me state that I am 100% okay with people disagreeing with me on my reviews. When it comes right down to it, all art is subjective and my opinion is just one of many. If you like something that I don't then there is nothing I can do or say to change that.

So why review at all? I am a firm believer that if you like or hate something, then you should be able to at least say why. This is important because it may give someone else the push to either check something out they weren't interested in or convince someone to avoid something they would otherwise go see. Marketing plays a big role in getting eyes on a product. Thus something that is mediocre or even bad may reach a bigger audience then something that is good. This is unfair to new and struggling creators who do produce high-quality work, but go unnoticed because they do not have a professional marketing department behind them to promote their work.

Additionally, while the overall quality of something is subjective, there are objective reasons for not liking something. In terms of books, bad writing is objective. If it wasn't, our teachers wouldn't take points off on our papers for spelling and bad grammar. In terms of alternate history, bad research is objective. If you base your alternate history on misconceptions, propaganda or outright lies, your readers will notice it and point it out to others. Sure, a good story can sometimes trump an implausible setting, but not all the time.

The above are just a few reasons why reviews matter. I could go into other reasons, but this is just an Editor's Note and I rather get to the meat of the post.

Here is an idea I initially wanted to hate, but after some serious thought I have warmed up to. Last week, Bloomberg profiled director Zack Snyder and /Film brought history nerds' attention to the following blurb:

One of these days, he’d like to make one about George Washington in the style of 300. He has a picture in his office of the Revolutionary War hero crossing the icy Delaware on his way to decimate the British in the Battle of Trenton. “We were talking about it,” Snyder says. “The first thing we asked was, well, how are we going to make it look? I pointed at this painting. It looks like 300. It’s not that hard.”

Now I can see why people may at first think this is a bad idea. In my opinion 300 is an incredibly inaccurate film, but it is still watchable. Part of the reason, as History Buffs pointed out in their review of the film, is because it is an adaptation of a heavily-stylized comic book written by the over-the-top mind of Frank Miller. Thus you can suspend disbelief pretty easily.

Now I like Zack Snyder. Dawn of the Dead, 300 and Watchmen...these are all entertaining, if sometimes flawed, films. That being said, it feels like Zack is adapting a single painting and throwing a lot of cliches from his other movies into a film about my country's most respected founding father. Audiences may not react well to such a portrayal of America's first president.

Of course, I'm the guy who liked the adaptation of Abraham Lincoln, Vampire Hunter. So perhaps a smart parody of over-top action films that is just self-aware enough without having to wink at the camera might just work. So this may not be a bad idea after all, as long as the producers deal with all of the Robot Chicken jokes that will come from it:


Picture of the Week

Breaking up the United States of America is a popular pastime for alternate historians, but occasionally its taken semi-seriously in the real world: 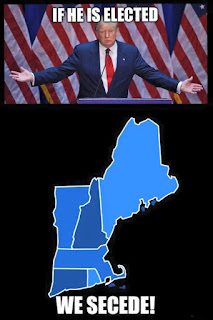 To be fair the last time states tried to secede, it didn't end well for anyone. So take the above with a grain of salt.

I may also be doing a Trope Talk on New England in the future, so stay tuned.