The critically acclaimed cult novelist makes visceral the terrors of life in Jim Crow America and its lingering effects in this brilliant and wondrous work of the imagination that melds historical fiction, pulp noir, and Lovecraftian horror and fantasy.

Chicago, 1954. When his father Montrose goes missing, 22-year-old Army veteran Atticus Turner embarks on a road trip to New England to find him, accompanied by his Uncle George—publisher of The Safe Negro Travel Guide—and his childhood friend Letitia. On their journey to the manor of Mr. Braithwhite—heir to the estate that owned one of Atticus’s ancestors—they encounter both mundane terrors of white America and malevolent spirits that seem straight out of the weird tales George devours.

At the manor, Atticus discovers his father in chains, held prisoner by a secret cabal named the Order of the Ancient Dawn—led by Samuel Braithwhite and his son Caleb—which has gathered to orchestrate a ritual that shockingly centers on Atticus. And his one hope of salvation may be the seed of his—and the whole Turner clan’s—destruction.

A chimerical blend of magic, power, hope, and freedom that stretches across time, touching diverse members of two black families, Lovecraft Country is a devastating kaleidoscopic portrait of racism—the terrifying specter that continues to haunt us today.

In Japan of 1852, the peace imposed by the Tokugawa Shoguns has lasted 250 years. Peace has turned to stagnation, however, as the commoners grow impoverished and their lords restless. Swords rust. Martial values decay. Foreign barbarians circle the island nation’s closed borders like vultures, growing ever more demanding.

Tōru, a shipwrecked young fisherman rescued by American traders and taken to America, defies the Shogun’s ban on returning to Japan, determined to save his homeland from foreign invasion. Can he rouse his countrymen in time? Or will the cruel Shogun carry out his vow to execute all who set foot in Japan after traveling abroad? Armed only with his will, a few books, dirigible plans and dangerous ideas, Tōru must transform the Emperor’s realm before the Black Ships come.

Tōru: Wayfarer Returns is the first book in the Sakura Steam Series, an alternate history of the tumultuous period from the opening of Japan in 1853 to the Meiji Restoration in 1868. This volume covers the year prior to the American Commodore Perry’s arrival in Japan and follows the hero and his young allies as they lead Japan through a massively compressed industrial revolution, dramatically altering that pivotal moment in history in their favor.

While Tōru and his dirigibles are fictional, the story unfolds against the backdrop of the "real" Japan of that period, with historical figures and their political environment woven into the tale, staying true to their motivations and agendas even as the alternate history warps their actions, history and a few laws of physics. Underpinning the adventure plot is a young man's yearning for his father's approval and an honorable place in his world.

Readers who enjoy steampunk alternate histories more typically set in Victorian England or the American Wild West may enjoy this steampunk story made fresh by the Japanese samurai setting, as well as readers who enjoy historical fiction set in Japan.

The Ballad of Black Tom by Victor LaValle

People move to New York looking for magic and nothing will convince them it isn't there.

Charles Thomas Tester hustles to put food on the table, keep the roof over his father's head, from Harlem to Flushing Meadows to Red Hook. He knows what magic a suit can cast, the invisibility a guitar case can provide, and the curse written on his skin that attracts the eye of wealthy white folks and their cops. But when he delivers an occult tome to a reclusive sorceress in the heart of Queens, Tom opens a door to a deeper realm of magic, and earns the attention of things best left sleeping.

A storm that might swallow the world is building in Brooklyn. Will Black Tom live to see it break? 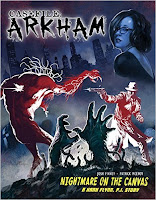 The Vlast stands two hundred feet tall, four thousand tons of steel ready to be flung upwards on the fire of atom bombs. Ready to take the dream of President-Commander of the New Vlast General, Osip Rizhin, beyond the bounds of this world.

But not everyone shares this vision. Vissarion Lom and Maroussia Shaumian have not reached the end of their story, and in Mirgorod a woman in a shabby dress carefully unwraps a sniper rifle. And all the while the Pollandore dreams its own dreams.

Victorious in a star-flung battle against the inhuman Horde, Earth’s fabled 9th Legion of Rome; the U.S. 5th Company’s 2nd Mounted Rifles; and a Special Forces anti-terrorist team settle on Arden, their adopted planet, to raise families and live in peace.

But soon, state secrets are revealed: The greatest of the inhuman Horde didn’t join the battle, but yet lurk among Arden’s outer colonies, posing a grave threat.

Humanity’s Ardenese defenders send a flotilla of ships to far Exordium, the world where the Horde outbreak began, with orders to reclaim the outer colonies…

As worlds are sundered, suns destroyed, and star systems obliterated, a universal conflict proves again that…

Death is only the beginning of the adventure.