Map Monday: The Truest Republicans by Rvbomally and Mumby

Rvbomally and Mumby both make a return to Map Monday with their "The Truest Republicans" map: 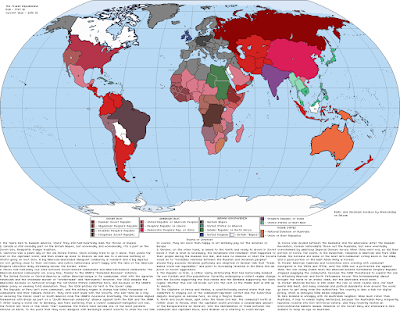 Designed by Rvbomally, but based off a scenario created by Mumby (who also helped with the map), it features a world where the United States followed a different economic philosophy. In this timeline, Alexander Hamilton and the Federalist Party dominate early American politics, turning the United States into an industrialized mercantile empire. American soon becomes a rich, but corrupt, colonial powerhouse that violently crushes any dissent, until they lose a global war and suffer a nasty revolution. The United Republic of American Peoples is now trying to create a pure agrarian society that reminds me of Pol Pot's Cambodia. Nasty stuff really.

What I like best of this map is the theory that early America represents Thomas Jefferson's vision of society, while modern America represents Alexander Hamilton's vision. This is a timely map, especially since the musical Hamilton is currently blowing up on Broadway. Plus I like political economic histories, which can be more interesting at times then timelines created by alternate outcomes to battles.