With the whole of human history altered, Denny Younger may be the last rewinder in existence—and the last person on earth with a chaser unit capable of time travel. While caring for his ailing sister, Denny must discover a way to recharge his device before he’s left with no defense against a past that wants him dead.

Before long, Denny notices a mysterious stranger following him—keeping tabs on Denny, his family, and his friends. Is Denny just paranoid? Or maybe he isn’t alone in this new reality after all…

When his chaser is stolen and his girlfriend is kidnapped, Denny risks everything to get both of them back. Launched into a high-stakes chase that spans continents and millennia, Denny’s responsibility to save our future isn’t over yet. It will take all of his cunning to stop a threat capable of steering the fate of the human race into disaster.

From the sensational files of the National Police Gazette, the shocking evidence of Hitler’s escape from the ruins of the Reich

As the Allied armies closed in on Berlin, the Nazi high command scrambled to escape their shattered city. On May 1, 1945, reports went out that Adolf Hitler and his mistress, Eva Braun, committed suicide in an underground bunker—but their bodies were never found. In this landmark exposé by the legendary National Police Gazette, the truth is finally told. As peace fell across Europe, two U-Boats made mad dashes for Argentina, remaining underwater for weeks at a time to evade detection. In their incredible journeys lies the shocking secret of how the greatest mass murderer in history escaped punishment for his crimes.

In the aftermath of World War II, the Police Gazette ruthlessly investigated any rumor of Hitler’s survival in South America. Hitler Is Alive! is a true epic of twentieth-century sensationalism.

"You ain't gonna like what I have to tell you, but I'm gonna tell you anyway. See, my name is Karen Memery, like memory only spelt with an e, and I'm one of the girls what works in the Hôtel Mon Cherie on Amity Street. 'Hôtel' has a little hat over the o like that. It's French, so Beatrice tells me."

Set in the late nineteenth century-in a city a lot like what we now call Seattle Underground-when airships plied the trade routes, would-be gold miners were heading to the gold fields of Alaska, and steam-powered mechanicals stalked the waterfront, Karen is a young woman on her own, is making the best of her orphaned state by working in Madame Damnable's high-quality bordello. Through Karen's eyes we get to know the other girls in the house-a resourceful group-and the poor and the powerful of the town.

Trouble erupts one night when a badly injured girl arrives at their door, begging sanctuary, followed by the man who holds her indenture, and who has a machine that can take over anyone's mind and control their actions. And as if that wasn't bad enough, the next night brings a body dumped in their rubbish heap-a streetwalker who has been brutally murdered.

Hard on the heels of that horrifying discovery comes a lawman who has been chasing this killer for months. Marshal Bass Reeves is closing in on his man, and he's not about to reject any help he can get, even if it comes from girl who works in the Hôtel Mon Cheri.

Elizabeth Bear brings alive this Jack-the-Ripper yarn of the Old Steampunk West with a light touch in Karen's own memorable voice, and a mesmerizing evocation of classic steam-powered science in Karen Memory.

The Glass Galago: A Tor.Com Original by A. M. Dellamonica

A.M. Dellamonica is at it again! The thrilling adventures of Gale Filachild and Captain Perrish continue in a series of prequel stories that offers to take us deeper into the fascinating world of Stormwrack.

When Gale and the crew of the Nightjar are called back to the fleet to handle an issue involving a law regulating new patents and a missing magical inscription, they soon find themselves embroiled in a plot that is could potentially pit island against island. Now, they must discover the mystery of the glass galago before time runs out for both it and the fleet.

Servant or Slave by Dusk Peterson
Is service a privilege or a chain?

Two young men face this question. Both live in the Dozen Landsteads, where life centers on the nation's Bay. One young man lives at the beginning of the twentieth century, the other in the sixteenth century. Both youths possess masters. But do the masters have their best interests at heart? 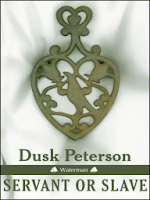 "Servant or Slave" presents twin tales of love, faithfulness, and responsibility. It can be read on its own or as a side story in Waterman, a speculative fiction series set in an alternative version of the Chesapeake Bay region.

Waterman is part of Turn-of-the-Century Toughs, a cycle of alternate history series (Dark Light, Waterman, Life Prison, Commando, Michael's House, and The Eternal Dungeon) about disreputable men on the margins of society, and the men and women who care for them. Set between the 1880s and the 1910s, the novels and stories take place in an alternative version of America that was settled by inhabitants of the Old World in ancient times. One of the series in the cycle, Waterman, combines elements of the 1910s with retrofuturistic imagery from the 1960s.