Editor's Note: Already broke my promise to have a video once a week. O well, here is a nice review instead. 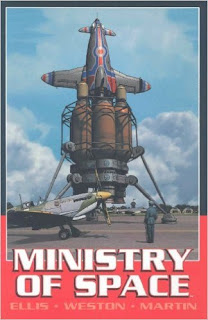 When you ask someone for an example of alternate history in comics they will likely suggest Watchmen, but Ministry of Space (written by Warren Ellis and art by Chris Weston) is a close second. This 2005 Sidewise Award winning graphic novel is well known throughout the alternate history community, but does it still hold up today?

In Ministry of Space, our story begins in 2001 with the news that the Americans are about to launch into space. Retired Royal Air Force officer, Sir John Dashwood, has to take a trip into orbit to Churchill Station to discuss an announcement the Americans are threatening to make if the British won't allow them into orbit with the Royal Space Force. As our story progresses, we get flashbacks on how Dashwood conceived of the plan to capture all of the German rocket scientists at Peenemünde and use them to give Britain a monopoly on space travel. Prime Minister Winston Churchill is at first reluctant to back Dashwood's plan, but eventually agrees to it and creates the "Ministry of Space" which is funded by a "black budget".

The British soon break the sound barrier (1946) and put the first satellite into space (1948). Dashwood himself becomes the first man in space (1950) after flying a rocketplane into orbit, although his plane crashes and he loses his legs in the process (but gets a knighthood, so it wasn't a complete waste). As time goes on we see the British Empire expand across the solar system, but all of the progress is called into question when the truth about the black budget is revealed and, without spoiling anything, Dashwood defiantly declares that it doesn't matter since Britain was given the stars.

Ministry of Space is worth a read if you haven't checked it out already. The design of Britain's space technology has a Jet Age sort feel to it and the story sort of captures the optimistic belief of that era that technology will make things better from everyone. The story, however, also highlights the dark side of the Age, since those stories often assume that the cultural/societal status quo will stay the same. In both the art and dialogue, we catch subtle ways the story-tellers are trying to tell us that this is not an idyllic timeline (i.e. the "Non-White Woman" quarters on Churchill station). In some ways Ministry of Space is trying to tell us that progress has a cost and we often forget those who had to suffer to create our present.

That all being said, Ministry of Space does have its issues. They seem to imply early on that the United States was keeping the secret of nuclear weapons from the British, despite the fact that Britain participated in the Manhattan Project in our timeline. Additionally, Bruce Munro in his take on the graphic novel also suggested that the British would have needed the helps of alien space bats to get as far as they did in this alternate timeline.

Despite the implausibilities, the Ministry of Space is a good looking comic with a strong message about how the world came to be what it is that resonates with this timeline as well. I was happy to finally read it and I think you will be too.