The British Lion: A Novel by Tony Schumacher

The Outlandish Companion Volume Two: The Companion to The Fiery Cross, A Breath of Snow and Ashes, An Echo in the Bone, and Written in My Own Heart's Blood by Diana Gabaldon 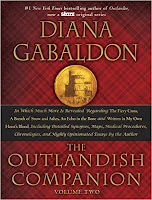 More than a decade ago, #1 New York Times bestselling author Diana Gabaldon delighted her legions of fans with The Outlandish Companion, an indispensable guide to all the Outlander books at the time. But that edition was just a taste of things to come. Since that publication, there have been four more Outlander novels, a side series, assorted novellas, and one smash-hit Starz original television series. Now Gabaldon serves up The Outlandish Companion, Volume Two, an all-new guide to the latest books in the series.
Written with Gabaldon’s signature wit and intelligence, this compendium is bursting with generous commentary and juicy insider details, including

• a complete chronology of the series thus far
• full synopses of A Fiery Cross, A Breath of Snow and Ashes, An Echo in the Bone, and Written in My Own Heart’s Blood
• recaps of the Lord John Grey novels: Lord John and the Private Matter, Lord John and the Brotherhood of the Blade, Lord John and the Hand of Devils, and The Scottish Prisoner
• a who’s who of the cast of Outlander characters, cross-referenced by book
• detailed maps and floor plans
• a bibliographic guide to research sources
• essays on subjects as wide ranging as Outlandish controversies regarding sex and violence, the unique responsibilities of a writer of historical fiction, and Gabaldon’s writing process
• a guided tour of the clothes, food, and music of the eighteenth century
• a Scottish glossary and pronunciation guide
• personal photos from the author taken on the set of the Starz Outlander series

As entertaining, sweeping, and addictive as the series itself, this second volume of The Outlandish Companion is a one (or two)-of-a-kind gift from an incomparable author.

It is 1888 and Queen Victoria has remarried, taking as her new consort Vlad Tepes, the Wallachian Prince infamously known as Count Dracula. Peppered with familiar characters from Victorian history and fiction, the novel follows vampire Geneviève Dieudonné and Charles Beauregard of the Diogenes Club as they strive to solve the mystery of the Ripper murders.

A little confused by time travel? Don't worry, these guys don't really understand it either. So they're breaking history! With the universe on the brink of destruction, Ivar must turn to his closest relatives - Armstrong and Gilad Anni-Padda - to save Neela Sethi from the machinations of the Prometheans! The problem? These three guys couldn't be further apart. Time doesn't heal all wounds as the assault on Oblivi-1 begins! Join New York Times best-selling writer Fred Van Lente (ARCHER & ARMSTRONG) and rising star Francis Portela (Green Lantern Corps) as they kick off the next volume of the series that io9 calls "impressively shocking!" Collecting IVAR, TIMEWALKER #5-8.

SOMETIMES, THE COST OF IMMORTALITY IS TOO HIGH…

The year is 1775, and the first rumblings of the American Revolution are only just being felt. But the War for Independence may be over before it even begins. When General George Washington learns of a daring expedition by British troops to discover a place of ultimate power—and the key to immortality itself—he knows that to salvage the war effort, his forces must get there first.

And to find the legend, Washington must employ a legend. Rumors of an ageless pirate who has haunted the high seas for more than a century abound. General Washington commissions an expedition to find and hire the immortal pirate, Lanme Wa—the Sea King—who has been stretched to the point of breaking, and who wants nothing more than to be left alone.

Their mission will not be easy. In a Caribbean world filled with voodoo, giant pythons, mischievous spirits and an army of mindless creatures who could live for millennia, the privateers of the Continental Navy might have bitten off more than they can chew.

Jack Sigler, an immortal Special Ops soldier stuck in the past, forced to live through thousands of years of history to return to his family in the present, is back in this second Continuum thriller from Jeremy Robinson and J. Kent Holloway, who once again boldly re-imagine history.

Wild Cards V: Down and Dirty is the latest of the George R.R. Martin's original Wild Cards series, now in trade paperback

Let the secret history of the world be told-of the alien virus that struck Earth after World War II, and of the handful of the survivors who found they now possessed superhuman powers. Some were called Aces, endowed with powerful mental and physical prowess. The others were Jokers, tormented by bizarre mind or body disfigurements. Some served humanity. Others caused terror. And now, forty years later, as a gang war between the Shadow Fists and the mafia rages out of control in the streets of Jokertown, Aces and Jokers go underground-to wage their own war against the powers of the netherworld.

Here, in the fifth volume of the exciting series, ten of science fiction's most gifted writers take readers on a journey of wonder and excitement in an astounding alternate history.