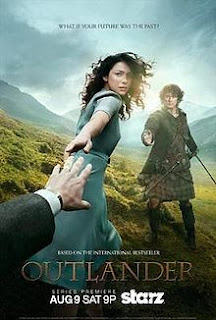 When I bought my wife, Alana, Outlander by Diana Gabaldon as a gift, I didn't expect her to fall in love with the series. To be honest I had little interest in reading the books myself, not because I thought they would be bad, I just wasn't interested. Watching the Starz adaptation, however, now that was something I was cool with. So over the last few weeks Alana and I sat down to watch the first eight episodes of Starz's Outlander and here I am now to share with you my thoughts on the series so far.

Outlander tells the story of Claire Randall, a WWII nurse who goes on a second honeymoon to Scotland with her husband, Frank, in an effort to reconnect with him. While there she accompanies Frank on his journeys to dig up more information on his ancestor, Captain Jonathan "Black Jack" Randall, who served in Scotland during the 18th century. Things seem to be going well, but Claire appears troubled and her relationship with Frank at times seems strange. Marital problems take a back seat, however, when a trip alone to see the standing stones at Craigh na Dun send Claire back in time to 1743 where she almost immediately runs into Black Jack who looks surprising like his descendant, but lacks the same good manners when he tries to rape Claire.

Rescued by a group of Scottish highlanders, Claire becomes a guest of Clan MacKenzie, but she soon finds herself held against her will because the Scots believe she is an English spy. While spending her time working as a healer in the castle, Claire decides she must either earn the trust of the MacKenzie's or escape so she can make it back to the standing stones in hopes that whatever brought her to the past can be reversed. Escape, however, goes further and further from her mind as she develops a relationship with the young Jamie Fraser.

Alternate history content is minimal in Outlander. Claire is afraid of telling anyone she is from the future in fear they will declare her a witch. She does learn, however, that the MacKenzies are supporters of the Jacobites and in a few years many would die at the Battle of Culloden, with the Highlander culture being suppressed by the English in order to break the power of the clans. She tries to warn them without giving away how she knows they will lose, but no one really cares because either they are sure they will win or else they don't see the possibility of defeat as a deterrent to their cause. This gives the entire tale a level of tragedy that makes it sad, but also entertaining, because some of the best stories out there don't have happy endings and I have feeling neither will Outlander.

Overall I found Outlander enjoyable to watch. It has drama and action to lighten the mood, but maybe could have done with a little more, although I have been told things will start picking up in later episodes. I should talk about the "female gaze" of the show. Unlike Game of Thrones, which is perhaps Outlander's main competition, more time is spent admiring the male rather than the female figure. You would think that takes me out of their core demographic, but it really isn't as excessive as you think. I am just saying don't start thinking Outlander is for "chicks".

Claire is a "strong and independent woman", even for her own time, but she is allowed to be weak, scared, wrong and helpless as well. More importantly, unlike other female protagonists that people fawn over (i.e. Bella from Twilight), Claire actually does things. She is a battlefield nurse, well-educated and in her own way she can be quite fearless. She can still be rescued, but sometimes she rescues herself or others as well. In short, she is allowed to be human and not a cliche.

The Scottish characters are also complex and even the scoundrels have their moments. I just wish they put more effort in the English characters. Most come off either as pompous, sadistic or spineless. I am reminded more of the British from The Patriot then what actual mid-18th century Englishmen were like. Black Jack is really difficult to watch as well. Yeah I know he is the bad guy, but they play up how evil he is so much that he becomes cartoonish in some scenes. Perhaps this is because the show (and possibly the books as well, but again I didn't read them) does tend to romanticize Highlander culture. This isn't bad per se, but after doing so well in so many other aspects of the show, its a shame they decided to phone it in with the non-Scottish characters.

One last thing: having not read the books, I don't known when the show diverges from the source material. My wife, however, was happy to point out some of these moments to me, like in one episode where we see Frank who has been spending weeks searching for his missing wife and is beginning to believe that she ran off with another man, due to his sighting of a mysterious Highlander staring at her through her window one night. I thought it was a nice human touch for the show and as the episode skipped between the past and present, I noticed the coloring was different. Things were brighter in the past, especially the greens, while things in the present seemed more subdued. A nice touch by the producers if I do say so myself.

All and all I can certainly give the first half of Season 1 of Outlander a passing grade. Its not perfect, but when it does something right, it does it very well. While I don't hold out hope to see any alternate history, I do expect to continue to be entertained and educated about a time period I know little about.