Timeline Thursday: Winged Hands of the Reich by SpanishSpy 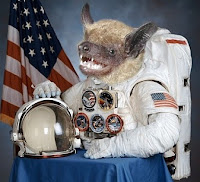 "Winged Hands of the Reich" is a silly, but enjoyably meta timeline that you can read on the AltHistory Wiki. Created by SpanishSpy, its point of divergence happened in 1940 when the Zheronians ("a fierce batlike species") arrive on Earth using their ships equipped with ISOT drives and ally themselves with Nazi Germany as part of their plan to conquer humanity. With the help of the Zheronians, the Axis powers defeat the Allies and divide the planet between themselves. With the planet under the heel of fascism, humanity begins to colonize the Solar System.

So...do you see what I meant when I said it was silly? Trust me, it gets even weirder the deeper you go into this timeline. For example, Adolf Hitler gets cybernetic enhancements and personally kills Joseph Stalin, while Charles de Gaulle becomes a space pirate. This is one of those timelines, however, that is not meant to be taken seriously. References to ASB, ISOT and other popular alternate history tropes are prevalent throughout the timeline. Take Operation Sealion, which only succeeded in this timeline because the Germans had the help of the bat-like Zheronians (and if you don't understand why that is funny then turn over your alternate historian card this instance!). In fact, discovering them all is half the fun of reading "Winged Hands of the Reich".

You can really tell SpanishSpy is a true fan of alternate history, not only from what I mentioned above, but also because of all the cameos by famous alternate historians in the timeline. Harry Turtledove, L. Sprague de Camp and Philip K. Dick are all leaders of the dissident literature movement of Pluto, a dumping ground of the Reich for undesirables (which includes not only John Birmingham, but also real life Jewish partisan Mordechai Anielewicz, who was made famous as a POV character in Turtledove's Worldwar series). S. M. Stirling, sadly, never made it to the relative safety of Pluto and was eventually captured by the Reich (a reference to his banning from AlternateHistory.com perhaps?).

To be fair, "Winged Hands of the Reich" is not without its flaws. The articles associated with the timeline are rather bare and not much work has been done since 2013. Additionally, I couldn't find any maps, flags, photos or any other original graphical content associated with the timeline, just stock images (hence why I used the image above that I found through Google instead of pulling it from the timeline). With a dedicated crew of contributors, this could become a first class ASB scenario that will make readers both laugh and think critically of the genre they love. As for now, its just junk food, which should always be consumed in moderation.

If there are any other web original timelines you would like me to review, please share in the comments below or email me at ahwupdate at gmail dot com.