So when I commented on Facebook the other day that I was alerted to the Blackhawks' Stanley Cup victory by the fireworks going off in my neighborhood my friend Jen challenged me to "write a short story about the day the hawks won like turn it into an alternate history story mixed with sic fi and zombies". At first I laughed it off until my mind actually started working on that very idea. It inspired me to write this short story and reboot the Timeline Thursday series. So enjoy and apologies ahead of time for the completely misleading title... 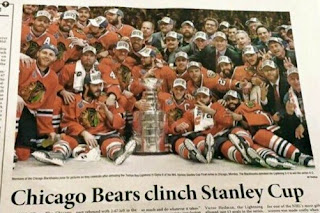 You've ever heard of Enrico Fermi?

Seriously? What do they teach you kids in college. Nevermind. Fermi was a scientist. Worked on the bomb in the 1940s. The bomb. One of the smartest people in the world Fermi was and one day he asked where are all the damn aliens were at? The galaxy as old as it is you think we would have heard from them by now. Now all we have to do is look outside to answer his question.

Yes I'm saying aliens caused this. You really think everything happening  right now was done by humans? Don't believe everything you read on the Internet, not that we have that anymore to worry about anymore.

Yeah I heard that one too. Tell you the truth I thought at first it was some biological weapon that got loose before I got tapped to head the Project. It all began when they noticed something in the Oort Cloud...um the Oort Cloud is this sphere surrounding the Solar System full of comets and...

So you know about the Oort Cloud but not Enrico Fermi? Fine, whatever, back to the story. So this thing that shouldn't be moving broke its orbit and started heading toward Earth. I remember the exact day they discovered it too. That was the day the Blackhawks won the Stanley Cup in 2015. I wonder if Duncan Keith got picked up in any of the sweeps. Be a real shame to lose him.

Sorry, anywho, no one knew what to make of it. It looked like an asteroid but when we took a closer look we saw...things on it.

Hard to describe really. Like dead trees with branches reaching for the stars. We kept prying eyes away from it and most of the other governments were on board. We just kept it in our sights and prepared for the worst and then...it stopped. For a few years it just sat there orbiting the sun near Jupiter, minding its own business until...

Exactly, the meteor showers. Nice catch, maybe there is hope for you here after all.

I'll get to that, this is more important. When all those surprise meteor showers were reported around the world we knew we screwed up, but we didn't know how truly fucked we were. It was slow at first. Increase in missing persons, food shortages, seemingly random acts of violence, towns waking up discovering they were covered in yellow dust...

Spore is perhaps a better name. They are actually microscopic creatures that enter the host and take over the higher functions. They force to victim to gorge themselves to give them the nutrients they need to start replicating. Then the growths begin so they can store more of themselves before going poof and use to winds to spread a new generation of spore babies to other hosts. Of course, sometimes they use the direct approach. Scratching and biting. I'm sure you had you share of that, huh?

Sorry to hear that, but what you did was a mercy. Whoever they were was long gone before they tried to do that.

Of course, it doesn't help, but what else is there to say at this point? Empathy is what makes us human and we aren't fighting anything human. We think that thing up there is actually a probe. Something left here by someone very old and very powerful to watch us and wait for the time when it had to kill us. That thing is the answer to Fermi's paradox. We haven't found any aliens yet because someone kills them off before they even get a chance to say hello.

Fight? How do we fight something we can't even reach? Kid, look around you, the fight is over. We lost. Don't let these guns and tall walls deceive you. This is the sinking of the Titanic after everyone has been ordered to abandon ship and the rich are the first in line for the lifeboats.

I agree, that is bullshit, but I rather save some than let everyone die. That is the Project's stated purpose anyway. We are building the ark to survive the flood and we are taking two of every dirty politician, trust fund brat, Wall Street scumbag, Hollywood whores and every other kind of our "betters" we can find. All putting their faith into something that no one has figured out a good name for yet.

Now you are asking the right questions. I am not sure what everyone else around the world is doing right now to survive, but you can bet your ass everyone from the highest plutocrat to the lowliest peasant is trying to stave off the darkness. I heard the Poles actually shot a rocket into space with frozen embryos on board. Hah! Apparently they can into space.

Sorry, bad joke. Like I said, we all have our plans, but ours is the only one that is going to work.

Because its my plan. When you were studying liberal arts, I was actually doing something useful with my student loans. I'm not ashamed to admit it, but I am a certified genius and the good old US of A recognized that and gave me a job. Before the Project I was working on the most secret of secret projects. Man, those were the days. Never-ending funding and not a single ethics committee in sight...

Right, I'll just cut to the chase. We are going to resettle in parallel reality where history turned out differently as we know it, preferably one with a developed enough infrastructure to support an influx of temporal refugees.

You're joking? Genocidal aliens and zombies aside, I honestly thought this would be the hardest concept to sell.

Counterfactuals? Never heard of them.

Spare me the explanation. I'm glad you are excited, but let me fill you in on some history not in your books. So there was this guy called Nikola Tesla...

I don't care if you've heard of him, let me finish. These next parts are very important. So Tesla head a strange signal over one of his machines. Crazy Serb thought he was hearing a message from the Martians. Turns out he was actually communicating for the first time in recorded history with someone from an alternate reality. Those who knew the truth covered it up in fear of how people would react.

Don't have too much faith in humanity kid. People can be kind of stupid, especially when they learn their savior or prophet is no where to be found on this other Earth. We found a lot of new toys too. Mostly harmless stuff really. Some of it we even released to the buying public and raked in the cash. Other stuff...well lets just say I know Uncle Sam isn't a saint, but he is certainly not a monster.

Trust me if we thought it would work against the zombies we would unleashed those dogs a long time ago. Anywho, the US government has been studying, communicating and travelling the multiverse now for more than a century. They have pulled what funding they can from groups like NASA and even used the whole UFO conspiracy craze to distract people from the research happening at Area 51. Pretty clever, huh?

Cliche? Everyone is a freaking critic. Well the plan now is to find the right reality that can support us. It can't be some primitive world where we never progressed beyond walking apes. Most of these people haven't even looked at dirt in their lives, much less farm it. It also can't have too many angry natives who decide to dispose of all those illegal immigrants crossing over into their reality. So while we man the barricades here we have been sending teams of soldiers, scientists and historians to find our new home. That's why you were picked up in one of the sweeps.

Isn't it obvious? We need historians in the field so they can learn about these worlds and tell us how they are different. That is important for picking our new home. We need to understand these worlds before we can live on them.

Classical history is good. We just got a report from one team that watched a chariot race where Central Park should have been. If you are lucky, maybe you will even get to go there.

Yep, that is why you are here. You may just be a graduate student, but you seem to know your history. Plus playing soccer all those years kept you in good shape, which is important. Some of these worlds can be pretty dicey and knowing how to run is a plus.

I'm not going to lie. We have lost teams before and probably will lose some more going forward. This is dangerous, but you can save lives this way and more importantly...listen I have been pushing for more recruits, any we can find. We need more teams for what I have planned.

Well for one thing it means I get to save some useful people for a change. For another, if these aliens exist here they can sure as shit exist in these other timelines. We haven't found evidence of them yet, but it is not like we can just commandeer a telescope and take a look. For all we know we could be doing this forever. Abandoning one timeline for another every time the aliens decide the time is right to wipe us out.

No, its not pointless. Remember, I'm a genius. I need more teams travelling farther than ever before. Going to the most distant realms of the multiverse until we are not even sure the people we meet there are still human. We are either going to find a reality where the aliens don't exist or we're going to find someone badder than them. Someone we can deal with to bring those bastards down and maybe even save this Earth. Our Earth.

So kid, what's it going to be? Are you ready to take a trip into the great unknown or are you going to take your chances outside these walls?