The Internet is a buzz about BBC's adaptation of Susanna Clarke's Jonathan Strange & Mr. Norrell, which premiered in Britain this weekend. I have talked about this show a lot over the last few weeks, so like Amazon's The Man in the High Castle, I decided just to list some of the articles I noticed below in the Links to the Multiverse section instead of writing another summary. Plus, I didn't want anything spoiled, but if you aren't worried about that, go check them out. 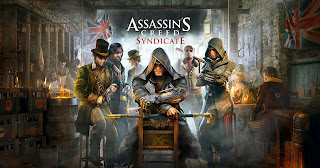 Well the trailer for the next installment in the somewhat historical Assassin's Creed series (I mean let's be honest, they do get a lot wrong) was released last week. Let's take a look:
Is anyone really surprised they went to Victorian London? Yep, Assassin’s Creed Syndicate is certainly trying to cash in on the popularity of steampunk. I guess it is only a matter of time before we see a full game set in World War II, but why not the American Civil War before Victorian London? Seriously, how cool would it be playing as an escaped slave as he knocks out Confederate Templars behind enemy lines?

Anywho, if you want to learn more about Assassin's Creed Syndicate, checkout the gameplay walkthrough or check out this video from the Nerdist that (allegedly) will tell you everything you need to know.

Friend of The Update, Alison Morton, has broken the Internet again with her tour for her new book Aurelia, the fourth installment in the Roma Nova series. I already shared the plot summary on last week's Weekly Update and on New Releases, so go click on one of those links if you want to see what the story is about. That being said, you can still see what Alison has been up to by checking out her guest post (and giveaway) on Brook Cottage Books, her interview on Christina Courtenay's site and her interview (and giveaway) at Unusual Historicals. Plus learn how her talks with Liesel Schwarz (Sky Pirates) at Foyles Bristol and Rossiter Books went from the author herself.

5 Ridiculous Cold War Myths You Probably Believe at Cracked.
Did the Greenland Colonists Flee to Join the Native Peoples of America? at Tor/Forge Blog.
Dreaming a Different Apollo: Part One at DSFP's Spaceflight History Blog.
Harriet Tubman is your potential replacement for Jackson on the $20 at The Washington Post.
Liberland president arrested by Croatia for trespassing in 'no man's land' at Fox News.
Nation Entranced as Supermodel’s Husband Is Implicated in Ball Firmness Scandal at Slate
The Summerhall Historical Fiction Festival in Edinburgh – Review by Paul F Cockburn at Alt Hist.
Victory Day, Ukraine, Communism, and Fascism Through a Counterfactual Prism by Gordon Hahn.
We should never forget - the Soviets won World War II in Europe at The Independent.
What If Corbusier Had Been Born in Germany? at The Counterfactual History Review.

Agent Carter Going West at File 770.
Documentary On Biggs Darklighter, A Character Mostly Cut From A New Hope at io9.
Natalie Portman to play Jackie Kennedy in film about the four days after JFK was shot at Daily Mail.
Outlander 1.14: All that Jazz at Paul Levinson's Infinite Regress.
Ripper Street to Return to Amazon with Two More Series at Geek Syndicate.