This week I decided to cover a map of not only someone who I have mentioned multiple times on this blog, but also someone who I plan to interview in the near future. I am talking about Rvbomally and on this week's Map Monday, we are looking at his map of the Rhenish Republic: 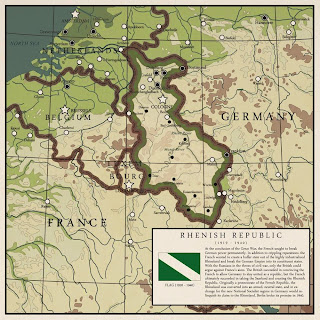 This map is set in a timeline where the United States stays neutral in World War I, leading to a different peace that sees France carving the Rhineland out of Germany to serve as a buffer state. This proves disastrous in the long run as it eventually becomes a motivation of the National Socialist government in Germany to restart the war in order to get the Rhenish Republic back. Its an intriguing scenario (and one I hope Rvbomally will expand on in the future) that also has a high-quality map to go with it.

Don't forget to check out the map of colonial Africa pre-WWI at io9. If you want to submit a map for the next Map Monday, email me at ahwupdate at gmail dot com with your map attached and a brief description in the body of the email.