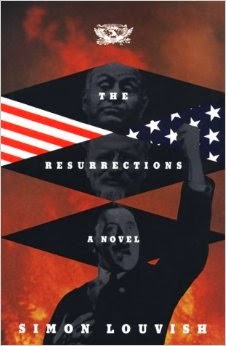 In light of the recent release of Turtledove's book, Joe Steele, about a would-be totalitarian dictator from OTL as a U.S. Citizen, changing the U.S. for the worse, here's something in a similar vein from 20+ years ago--Simon Louvish's The Resurrections (a.k.a. Resurrections from the Dustbin of History).

The divergence? The survival of German Marxist leaders, Rosa Luxemburg and Karl Liebknecht, in post-Great War Germany (murdered by the Freikorps, in OTL), followed in 1923 by a successful putsch against the Weimar government, and the fledgling Nazi Party fleeing into U.S. exile as a result. (An apparent spillover effect of this is Trotsky killing Stalin, and coming to power, post-Lenin, remaining in power until he dies in '67.) The exiled Nazis are active in U.S. politics for decades, agitating against the USSR and Germany, and engaging in cloak-and-dagger plots to overthrow the German government (similar to OTL's Cuban exile activity against the Castros), even as Joseph Gable (Goebbels' Anglicized Ellis Island surname) grooms Hitler's U.S.-born sons for the White House (not unlike Joe Kennedy, Sr. and his boys). This is increasingly likely, as this U.S., unaware of the Nazi evil, is receptive to their xenophobia and nativism, when a surviving Empire of Japan (its expansion blocked by the U.S. in the Pacific War) turns nuke-capable, launching a nuclear Pearl Harbor--9/11-style attack on L.A in '52, allowing the rise of the Nazis as an independent party that challenges the survival of both the Democrats and the GOP.

The book also examines what a world sans World War II would look like, including Mussolini surviving into the '60s, his death bringing about an “Italian Spring,” and dramatically increasing the odds of a Communist revolution led by Che Guevara, operating out of Italian Ethiopia (absent a Second World War to erode their foundations, European empires are only now crumbling), China under Marshall Chu-Teh, not Mao (dead at Chiang Kai-Shek's hands, yet with Chiang's own death aborting a Taiwan-based Nationalist regime), and multiple POV chapters, with the world seen through the eyes of Che, Gable, an Italian Major in colonial Africa, plotting with Che, exiles from a Greek junta coming to power after the death of “the Antichrist Trotsky”, idealistic young Jews in a Zionist diaspora (sans Nazis to spur the creation of a Jewish state, Jews in Palestine fall prey to internecine conflict, delaying statehood for a generation), and news media coverage of various crises, to name a few. And minus the shot in the arm that exposure of the Holocaust provided to the Civil Rights movement in OTL, the volatile, racist political climate in the U.S. proves detrimental to it (and its icons) in this reality.

Plenty of stuff in this book that would be ripe for dramatic cinematic treatment, no shortage of tension, skullduggery and scheming, and the Nazi struggle for the White House is particularly harrowing, the latter effort shocking in a manner not unlike an unrelated moment near the end of Michael Chabon's The Yiddish Policemen's Union. More than a few historical figures make Easter Egg cameos, if you keep an eye out for for them, and a 1990 Epilogue, rather than wrapping things up in a neat, tidy package, describes a world continuing to rotate on its grim axis, new world crises replacing old ones, which I felt added a level of realism.

Also, for a book written in 1994, much in the book feels eerily prescient. A nail-biter of a close Presidential race, the final outcome of which is to be decided by Florida? Check. A 9/11-style suicide attack on U.S. soil, nationwide outrage followed by later-discredited GOP administrations (McCarthy-Nixon) dragging the U.S. into wasteful decade-and-a-half long wars (Japan and Cuba) that are blamed for reducing the U.S. to a “political, economic, and moral basket case"? Check. Right-wing conspiracy-mongers (U.S. Nazis) manufacturing bogus claims about U.S. Presidents (or Presidential aspirants) having crypto-Communist, non-Christian, non-U.S. origins and/or names? Again, check; while hardly a new development, casual racist references to Rosenfelt/Roosevelt, Stevenson/Stevenshein, Goldwasser/Goldwater, and Rothschild-feller/Rockefeller remind one uncomfortably of present-day Birthers targeting “Barry Sotero” (i.e., Barack Obama).

If I had any complaints about the book, it's that Simon Louvish, not a U.S. Author (the jacket cover describes him as a “Scots-born Israeli”) needed to do a bit more research about U.S. politics, getting U.S. Presidential election years wrong on a few occasions, (describing 1921, 1935, 1961, and future political dates 1973 and 1978), as Presidential campaign years, days leading up to Mussolini's death are out of order (ailing on July 19th--dead on the 13th?), and a George McGovern statehood gaffe that might surprise South Dakota voters! Despite this, I would definitely recommend it, if you can find it.

When not contributing zines to the alternate history APA, Point of Divergence (as he has done for nearly 16 years), Robert Gill is employed at a book binding facility in Central Wisconsin, surrounded by many books (often of a historical nature), yet lacks leisure time to peruse said texts. Despite honing writing skills in a writer's workshop, he has no published works (or rejection slips) to call his own, and must, alas, submit his humble observations on AH titles, hoping others find them worthy or intellectually stimulating.
Posted by Mitro at 11:00 AM