So I was at Capricon this weekend and to be honest, it was kind of a disappointment. I wasn't interested in the panels that were offered and attendance at the panels I was on, even from the panelists, was low. O well, maybe it will be better next year.

A new book that is making the Internet rounds is Viola Carr's The Diabolical Miss Hyde. Here is the description from Amazon:

Forensic science, magic, mystery, and romance mix in this edgy steampunk fantasy—a retelling of the horror classic, in which Dr. Eliza Jekyll, daughter of the infamous Dr. Henry Jekyll—pursues a dangerous murderer in an alternate Victorian London.

In an electrified Victorian London, Dr. Eliza Jekyll is a crime scene investigator, hunting killers with newfangled technological gadgets. She will need every advantage available to catch a terrifying new psychopath splattering London with blood. Hidden in the grimy shadows, the fiendish murderer preys on beautiful women, drugging them before slicing off their limbs. Finding the “Slicer” can make Eliza’s career . . . or unmask her darkest secret. Like her father, she has a hidden second self that emerges when she drinks his forbidden magical elixir. Just a few sips, and a seductive and impulsive Lizzie Hyde is unleashed.

The members of the Royal Society do not trust Eliza, and they send their enforcer, the mercurial Captain Lafayette, to prove she’s a dangerous sorceress. The careful doctor knows that one wrong step can make her prey to the clever Lafayette, a man who harbors an evil curse of his own. No matter how much she craves the elixir, she must resist.

But as the Slicer case draws her into London’s luminous magical underworld, Eliza will need the potion’s power to help her . . . even if it might attract the attentions of Lafayette. .

Even if it means setting the wild Lizzie free. . . .

Carr has been doing a lot of promotion for her new novel. At SF Signal she wrote a guest post discussing magic and science and she stopped by The Qwillery to give an interview. If you happen to check out The Diabolical Miss Hyde, let us know what you thought in the comments.

This weekend, Paradox Development Studio is marking the third anniversary of its medieval grand strategy game Crusader Kings II. Since its release in February 2012, Crusader Kings II has sold 1.1 million copies of the base game and over 2.5 million copies of its various expansions. If you include the cosmetic DLC for sale, that adds up to over 8 million add-ons for the base game. Over the last year of its lifetime, Crusader Kings II is still averaging over a hundred thousand monthly active users on Steam. Paradox also released this infographic of the game's history: 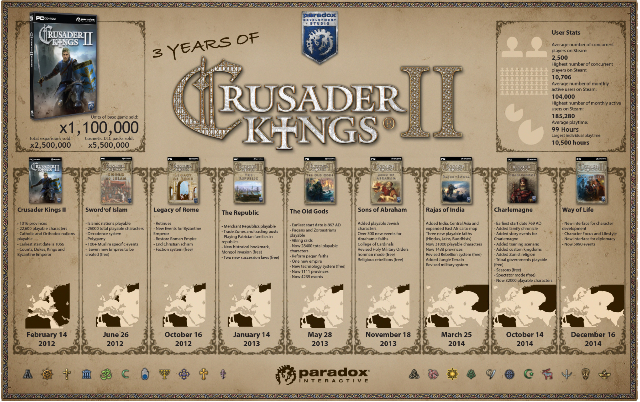 “We continue to be overwhelmed by the popularity of Crusader Kings II,” says lead designer Henrik Fahraeus. “For many thousands of people, this is their first Paradox game, and people continue to tell us about the rise and fall of their dynasties and empires. Our games at PDS have always been about stories, but Crusader Kings II gives you characters sometimes doing petty things on a grand stage. I think people like that.”

To celebrate this anniversary, Paradox is offering a week’s worth of special discounts on a selection of Crusader Kings II related products at the official webstore and select partners.

We end the week as usual with some more alternate history videos. We begin with this video with Book Riot which recommends several books to read for Black History Month:
And we end with Kinda Funny checking out the the alternate history of The Order: 1886:

Coming Soon: IRON AND BLOOD by Gail Z. Martin and Larry Martin at SF Signal.
Genre Fiction Honored by the Alex and Stonewall Book Awards and the RUSA Reading List at Tor.
Leanna Renee Hieber (ETERNA FILES) on Why She Writes Gaslamp Fantasy at SF Signal.
Review: Cannonbridge by Jonathan Barnes at My Bookish Ways.
Review: The Plot Against America by Philip Roth at Robbie Taylor(.net).
The Vivisectionist’s Daughter by Jason Kahn – Free Story from Alt Hist Issue 7 at Alt Hist.
War in the Atomic Age? by Mark at Atomic Skies.
What if? Alternative history’s butterfly moments reach lift-off by Adrian McKinty at The Guardian.
Why I Love/Hate the Emberverse by Matthew Stienberg at The M.

Alternate histories of the automotive industry by Kelly Taylor at Winnipeg Free Press.
Ask John Neely Bryan: A Counterfactual History of Oak Cliff at D Magazine.
The Big Questions Holds Debate On Whether Jesus And Buddha Were Aliens at Huff Post.
If Ken Clarke had won by JC at The Economist.
It's BCB's 10th Birthday Today! Celebrate With This Cubs Alternate History at SB Nation.
Canada's rejected flags: A look at lost voices and strange ideas at The Star.
What Will We Do Without Craig Kilborn? at The Daily Beast.

Ironcast Video and Screens Released at Gamers Hell.
Review: Wolfenstein: The New Order at Ramblings of the Easily Distracted.